When one listens to contemporary Country Music these days, it bears little resemblance to the traditional sound that helped define the genre decades ago. When Hank Williams, Faron Young, Patsy Cline, George Jones and Johnny Cash sang, you could almost smell the beer-soaked wooden floorboards of the old honky tonks coming through your radio. Nowadays, when you listen to contemporary Country Music, all you can smell is the mall. For better or worse, Country Music has gone through many changes over the years and remains one of the most consistently popular – and profitable – genres of music in the U.S. However, while it has been pushed out of the limelight in the States, the traditional Country sound of the ’50s and ’60s remains hugely popular in Europe. Many iconic Country & Western artists that have long since been forgotten in their homeland are revered in countries they probably never set foot in. Ray Price, Marty Robbins, Don Gibson, Marvin Rainwater, Stonewall Jackson and Hank Snow are just a few of the pioneering artists that are seldom remembered by a generation of Americans who were born after the Urban Cowboy-inspired Country resurgence in the ’80s. We must now look to these European countries if we want deluxe reissues and box sets from these Trad Country acts, who seldom have more than a single disc ’hits’ collection available here in the U.S. of A.

Another by-product of Europe’s love of American C&W music is the fact that so many younger artists have been inspired by the older recordings and are now bringing the Trad Country sound back full circle. One such band is Sweden’s The Country Side Of Harmonica Sam.
The first thing one notices when listening to their music is the complete lack of a harmonica on their recordings – quite strange for a band that goes by the name of The Country Side Of Harmonica Sam! But hold on – there’s a good explanation for that! Apparantely, singer Sam Andersson earned that nickname when he played Blues harmonica in the ’90s. He’s moved on musically but the nickname stuck.
The second thing one notices when spinning their records is their authentic Honky Tonk swing. Some bands tip their hats to the past in tribute to their influences but not these guys!  The Country Side Of Harmonica Sam immerse themselves into every aspect of the Honky Tonk music and lifestyle of the era – from the matching outfits to the ’live in the studio’ analog recordings. The only thing that would make this music more legit is if they time-travelled back some 60 years and recorded with Owen Bradley!
The band’s 2017 album, A DRINK AFTER MIDNIGHT, is an excellent follow-up to their debut album OPEN LETTER TO THE BLUES (2015). ”Lookout Heart,” Even At My Best,” ”Cry Me A River,” and the title track leap from the speakers and fill the room with that beer-soaked aroma missing from the genre today. ”Blues Are Settin’ In” adds a touch of Buddy Holly’s melodicism. Sam’s vocals on tear-jerkers like ”Country Girl” and ”Tears Don’t Stain” will reach deep inside and break your brittle heart. The rest of the album is just as exciting as the tracks I’ve pointed out already! A scorching good time from beginning to end, A DRINK AFTER MIDNIGHT will satisfy your desire to reconnect to that part of you that longs for a simpler, better life when Honky Tonk was about loving, drinking and letting go!
Stephen SPAZ Schnee sent a load of questions to the band and guitarist/harmony vocalist Johan Bandling Melin took time out of the band’s busy schedule to answer them.
Ladies and gentlemen, I’d like you to meet The Country Side Of Harmonica Sam… 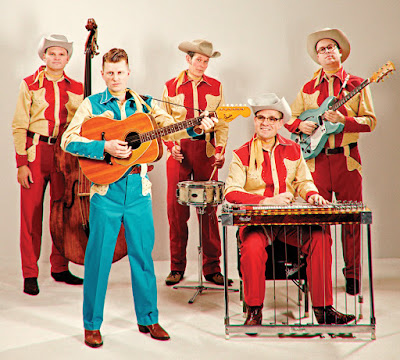 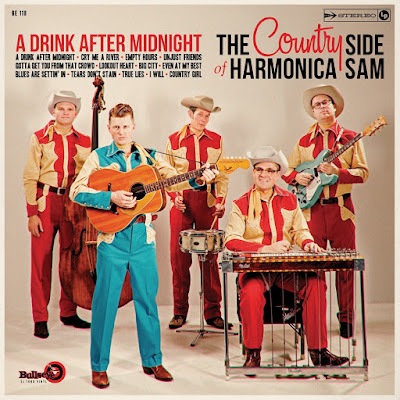 A DRINK AFTER MIDNIGHT
Also available: 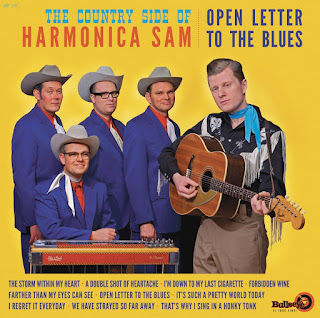 OPEN LETTER TO THE BLUES