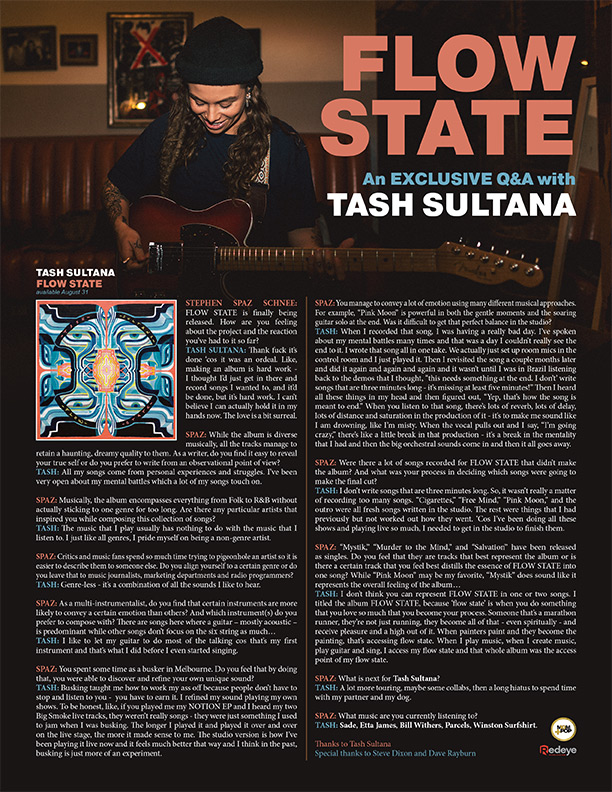 SPAZ: While the album is diverse musically, all the tracks manage to retain a haunting, dreamy quality to them. As a writer, do you find it easy to reveal your true self or do you prefer to write from an observational point of view?
TASH: All my songs come from personal experiences and struggles. I’ve been very open about my mental battles which a lot of my songs touch on.

SPAZ: Musically, the album encompasses everything from Folk to R&B without actually sticking to one genre for too long. Are there any particular artists that inspired you while composing this collection of songs?
TASH: The music that I play usually has nothing to do with the music that I listen to. I just like all genres, I pride myself on being a non-genre artist.

SPAZ: Critics and music fans spend so much time trying to pigeonhole an artist so it is easier to describe them to someone else. Do you align yourself to a certain genre or do you leave that to music journalists, marketing departments and radio programmers?
TASH: Genre-less – it’s a combination of all the sounds I like to hear

SPAZ: As a multi-instrumentalist, do you find that certain instruments are more likely to convey a certain emotion than others? And which instrument (s) do you prefer to compose with? There are songs here where a guitar – mostly acoustic – is predominant while other songs don’t focus on the six string as much…
TASH: I like to let my guitar to do most of the talking cos that’s my first instrument and that’s what I did before I even started singing.

SPAZ: You spent some time as a busker in Melbourne. Do you feel that by doing that, you were able to discover and refine your own unique sound?
TASH: Busking taught me how to work my ass off because people don’t have to stop and listen to you – you have to earn it. I refined my sound playing my own shows. To be honest, like, if you played me my NOTION EP and I heard my two Big Smoke live tracks, they weren’t really songs – they were just something I used to jam when I was busking. The longer I played it and played it over and over on the live stage, the more it made sense to me. The studio version is how I’ve been playing it live now and it feels much better that way and I think in the past, busking is just more of an experiment.

SPAZ: You manage to convey a lot of emotion using many different musical approaches. For example, “Pink Moon” is powerful in both the gentle moments and the soaring guitar solo at the end. Was it difficult to get that perfect balance in the studio?
TASH: When I recorded that song, I was having a really bad day. I’ve spoken about my mental battles many times and that was a day I couldn’t really see the end to it. I wrote that song all in one take. We actually just set up room mics in the control room and I just played it. Then I revisited the song a couple months later and did it again and again and again and it wasn’t until I was in Brazil listening back to the demos that I thought, “this needs something at the end. I don’t’ write songs that are three minutes long – it’s missing at least five minutes!” Then I heard all these things in my head and then figured out, “Yep, that’s how the song is meant to end.” When you listen to that song, there’s lots of reverb, lots of delay, lots of distance and saturation in the production of it – it’s to make me sound like I am drowning, like I’m misty. When the vocal pulls out and I say, “I’m going crazy,” there’s like a little break in that production – it’s a break in the mentality that I had and then the big orchestral sounds come in and then it all goes away.

SPAZ: Were there a lot of songs recorded for FLOW STATE that didn’t make the album? And what was your process in deciding which songs were going to make the final cut?
TASH: I don’t write songs that are three minutes long. So, it wasn’t really a matter of recording too many songs. “Cigarettes,” “Free Mind,” “Pink Moon,” and the outro were all fresh songs written in the studio. The rest were things that I had previously but not worked out how they went. ‘Cos I’ve been doing all these shows and playing live so much, I needed to get in the studio to finish them.

SPAZ: “Mystik,” “Murder to the Mind,” and “Salvation” have been released as singles. Do you feel that they are tracks that best represent the album or is there a certain track that you feel best distills the essence of FLOW STATE into one song? While “Pink Moon” may be my favorite, “Mystik” does sound like it represents the overall feeling of the album…
TASH: I don’t think you can represent FLOW STATE in one or two songs. I titled the album FLOW STATE, because ‘flow state’ is when you do something that you love so much that you become your process. Someone that’s a marathon runner, they’re not just running, they become all of that – even spiritually – and receive pleasure and a high out of it. When painters paint and they become the painting, that’s accessing flow state. When I play music, when I create music, play guitar and sing, I access my flow state and that whole album was the access point of my flow state.

SPAZ: What is next for Tash Sultana?
TASH: A lot more touring, maybe some collabs, then a long hiatus to spend time with my partner and my dog.

Thanks to Tash Sultana

Special thanks to Steve Dixon and Dave Rayburn 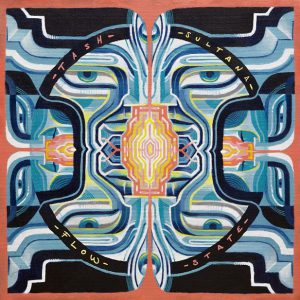