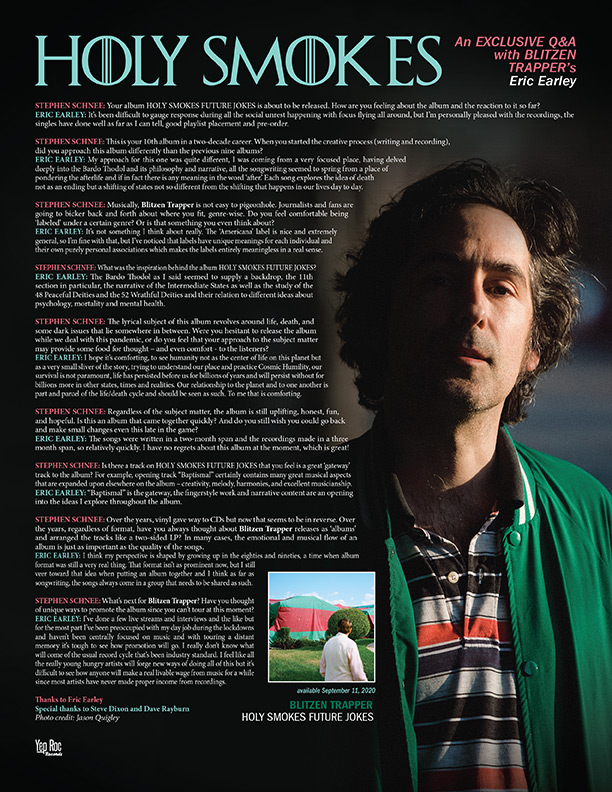 STEPHEN SCHNEE: Your album HOLY SMOKES FUTURE JOKES is about to be released. How are you feeling about the album and the reaction to it so far?
ERIC EARLEY: It’s been difficult to gauge response during all the social unrest happening with focus flying all around, but I’m personally pleased with the recordings, the singles have done well as far as I can tell, good playlist placement and pre-order.

STEPHEN SCHNEE: This is your 10th album in a two-decade career. When you started the creative process (writing and recording), did you approach this album differently than the previous nine albums?
ERIC EARLEY: My approach for this one was quite different, I was coming from a very focused place, having delved deeply into the Bardo Thodol and its philosophy and narrative, all the songwriting seemed to spring from a place of pondering the afterlife and if in fact there is any meaning in the word ‘after.’ Each song explores the idea of death not as an ending but a shifting of states not so different from the shifting that happens in our lives day to day.

STEPHEN SCHNEE: Musically, Blitzen Trapper is not easy to pigeonhole. Journalists and fans are going to bicker back and forth about where you fit, genre-wise. Do you feel comfortable being ‘labeled’ under a certain genre? Or is that something you even think about?
ERIC EARLEY: It’s not something I think about really. The ‘Americana’ label is nice and extremely general, so I’m fine with that, but I’ve noticed that labels have unique meanings for each individual and their own purely personal associations which makes the labels entirely meaningless in a real sense.

STEPHEN SCHNEE: Musically, which artists inspired the music on the album? On albums by other arists, you can instantly hear a Beatles influence. However, on HOLY SMOKES FUTURE JOKES, the songwriting and arrangements seem closer to Paul Simon than Paul McCartney.
ERIC EARLEY: Definitely a more soft-spoken vibe on this record, I was going back into the Elliott Smith recordings and even further back into the John Fahey/John Renbourn/Roy Harper recordings I listened to when I was younger.

STEPHEN SCHNEE: What was the inspiration behind the album HOLY SMOKES FUTURE JOKES?
ERIC EARLEY: The Bardo Thodol as I said seemed to supply a backdrop, the 11th section in particular, the narrative of the Intermediate States as well as the study of the 48 Peaceful Deities and the 52 Wrathful Deities and their relation to different ideas about psychology, mortality and mental health.

STEPHEN SCHNEE: The lyrical subject of this album revolves around life, death, and some dark issues that lie somewhere in between. Were you hesitant to release the album while we deal with this pandemic, or do you feel that your approach to the subject matter may provide some food for thought – and even comfort – to the listeners?
ERIC EARLEY: I hope it’s comforting, to see humanity not as the center of life on this planet but as a very small sliver of the story, trying to understand our place and practice Cosmic Humility, our survival is not paramount, life has persisted before us for billions of years and will persist without for billions more in other states, times and realities. Our relationship to the planet and to one another is part and parcel of the life/death cycle and should be seen as such. To me that is comforting.

STEPHEN SCHNEE: Regardless of the subject matter, the album is still uplifting, honest, fun, and hopeful. Is this an album that came together quickly? And do you still wish you could go back and make small changes even this late in the game?
ERIC EARLEY: The songs were written in a two-month span and the recordings made in a three month span, so relatively quickly. I have no regrets about this album at the moment, which is great!

STEPHEN SCHNEE: Is there a track on HOLY SMOKES FUTURE JOKES that you feel is a great ‘gateway’ track to the album? For example, opening track “Baptismal” certainly contains many great musical aspects that are expanded upon elsewhere on the album – creativity, melody, harmonies, and excellent musicianship.
ERIC EARLEY: “Baptismal” is the gateway, the fingerstyle work and narrative content are an opening into the ideas I explore throughout the album.

STEPHEN SCHNEE: Over the years, vinyl gave way to CDs but now that seems to be in reverse. Over the years, regardless of format, have you always thought about Blitzen Trapper releases as ‘albums’ and arranged the tracks like a two-sided LP? In many cases, the emotional and musical flow of an album is just as important as the quality of the songs.
ERIC EARLEY: I think my perspective is shaped by growing up in the eighties and nineties, a time when album format was still a very real thing. That format isn’t as prominent now, but I still veer toward that idea when putting an album together and I think as far as songwriting, the songs always come in a group that needs to be shared as such.

STEPHEN SCHNEE: What’s next for Blitzen Trapper? Have you thought of unique ways to promote the album since you can’t tour at this moment?
ERIC EARLEY: I’ve done a few live streams and interviews and the like but for the most part I’ve been preoccupied with my day job during the lockdowns and haven’t been centrally focused on music and with touring a distant memory it’s tough to see how promotion will go. I really don’t know what will come of the usual record cycle that’s been industry standard. I feel like all the really young hungry artists will forge new ways of doing all of this but it’s difficult to see how anyone will make a real livable wage from music for a while since most artists have never made proper income from recordings.