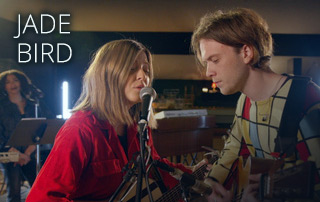 Born in Hexham, England in 1997, Jade Bird is a British singer, songwriter, and musician. While her music isn’t defined by a specific genre, she has been labeled by several critics as Americana and indie Folk. With many different influences infiltrating her sound, she has also been embraced by fans of Alternative, Country, and Pop music. In the tradition of classic Folk music, Jade Bird is not just a songwriter, she is also a storyteller. The child of a broken home, she began writing songs at a young age. During her last year attending BRIT School (a performing arts and technology school located in Croydon), she recorded a demo, which led to a management deal and then, in 2017, a label deal with Glassnote Records. At just 20 years old, Jade Bird was on her way to becoming one of the UK’s most celebrated singer/songwriters.

Her first EP, SOMETHING AMERICAN, was released in 2017 and garnered her critical praise and, most importantly, introduced her to a larger audience. By the time of her 2018 single, “Lottery”, her popularity had traveled outside of the UK. The single became a big hit in the U.S., reaching the #1 spot on the Adult Alternative Airplay chart and #34 on the Adult Top 40 Airplay chart. Jade Bird’s self-titled debut album was released in April 2019. The album hit #10 on the album charts in the UK and Scotland while sailing to #1 on the UK’s Americana chart. In the U.S., the JADE BIRD album rose to #1 on Billboard’s Heatseekers chart and #14 on the Folk Albums chart. The album also included the hit singles “Uh Huh” and “I Get No Joy”.  In 2020, while the world came to a crawl under the COVID-19 pandemic, Jade Bird offered so many people hope with the release of post-debut album singles “Headstart” and “Houdini”.

Now, with the release of her second album, DIFFERENT KINDS OF LIGHT, Jade Bird has added more layers to her sound, making it much harder to pigeonhole her talents. And that, readers, is a good thing. On this sophomore album, she embraces the edgier Britpop influences of her youth while also maintaining control over all the musical elements that brought her international recognition. With songs that still speak to the head and heart, DIFFERENT KINDS OF LIGHT like the precocious younger sibling to the JADE BIRD album. Tracks like “Open Up the Heavens”, “Honeymoon”, “Houdini”, “Candidate”, “Headstart” (not on the vinyl edition) and “1994” are muscular and tough but not necessarily worlds away from her debut album – they still retain the charm of her debut album without sounding as innocent. Her gentle side is reflected in songs such as “Prototype” and “Red, White and Blue”, while other tracks fall somewhere between the old and the new.  DIFFERENT KINDS OF LIGHT is an album of growth, and album of strength, and, in many ways, a beacon of hope.