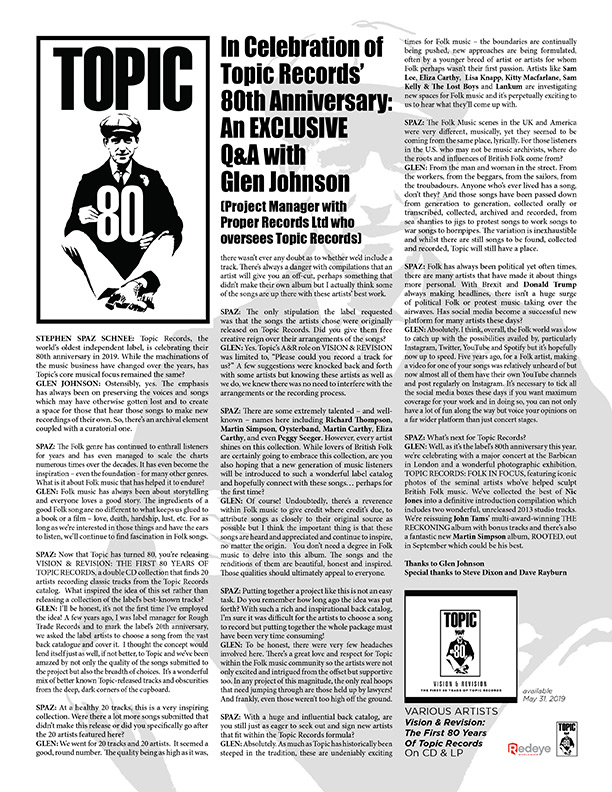 STEPHEN SPAZ SCHNEE: Topic Records, the world’s oldest independent label, is celebrating their 80th Anniversary in 2019. While the machinations of the music business have changed over the years, has Topic’s core musical focus remained the same?
GLEN JOHNSON: Ostensibly, yes.  The emphasis has always been on preserving the voices and songs which may have otherwise gotten lost and to create a space for those that hear those songs to make new recordings of their own.  So, there’s an archival element coupled with a curatorial one.


SPAZ: The Folk genre has continued to enthrall listeners for years and has even managed to scale the charts numerous times over the decades. It has even become the inspiration – even the foundation – for many other genres. What is it about Folk music that has helped it to endure?
GLEN: Folk music has always been about storytelling and everyone loves a good story.  The ingredients of a good Folk song are no different to what keeps us glued to a book or a film – love, death, hardship, lust, etc.  For as long as we’re interested in those things and have the ears to listen, we’ll continue to find fascination in Folk songs.

SPAZ: Now that Topic has turned 80, you’re releasing VISION & REVISION: THE FIRST 80 YEARS OF TOPIC RECORDS, a double CD collection that finds 20 artists recording classic tracks from the Topic Records catalog.  What inspired the idea of this set rather than releasing a collection of the label’s best-known tracks?
GLEN: I’ll be honest, it’s not the first time I’ve employed the idea!   A few years ago, I was label manager for Rough Trade Records and to mark the label’s 20th anniversary, we asked the label artists to choose a song from the vast back catalogue and cover it.  I thought the concept would lend itself just as well, if not better, to Topic and we’ve been amazed by not only the quality of the songs submitted to the project but also the breadth of choices.  It’s a wonderful mix of better known Topic-released tracks and obscurities from the deep, dark corners of the cupboard.

SPAZ: At a healthy 20 tracks, this is a very inspiring collection. Were there a lot more songs submitted that didn’t make this release or did you specifically go after the 20 artists featured here?
GLEN: We went for 20 tracks and 20 artists.  It seemed a good, round number.  The quality being as high as it was, there wasn’t ever any doubt as to whether we’d include a track.  There’s always a danger with compilations that an artist will give you an off-cut, perhaps something that didn’t make their own album but I actually think some of the songs are up there with these artists’ best work.

SPAZ: The only stipulation the label requested was that the songs the artists chose were originally released on Topic Records. Did you give them free creative reign over their arrangements of the songs?
GLEN: Yes. Topic’s A&R role on VISION & REVISION was limited to, “Please could you record a track for us?”  A few suggestions were knocked back and forth with some artists but knowing these artists as well as we do, we knew there was no need to interfere with the arrangements or the recording process.

SPAZ: There are some extremely talented – and well-known – names here including Richard Thompson, Martin Simpson, Oysterband, Martin Carthy, Eliza Carthy, and even Peggy Seeger. However, every artist shines on this collection. While lovers of British Folk are certainly going to embrace this collection, are you also hoping that a new generation of music listeners will be introduced to such a wonderful label catalog and hopefully connect with these songs… perhaps for the first time?
GLEN: Of course!  Undoubtedly, there’s a reverence within Folk music to give credit where credit’s due, to attribute songs as closely to their original source as possible but I think the important thing is that these songs are heard and appreciated and continue to inspire, no matter the origin.  You don’t need a degree in Folk music to delve into this album.  The songs and the renditions of them are beautiful, honest and inspired.  Those qualities should ultimately appeal to everyone.

SPAZ: Putting together a project like this is not an easy task. Do you remember how long ago the idea was put forth? With such a rich and inspirational back catalog, I’m sure it was difficult for the artists to choose a song to record but putting together the whole package must have been very time consuming!
GLEN: To be honest, there were very few headaches involved here.  There’s a great love and respect for Topic within the Folk music community so the artists were not only excited and intrigued from the offset but supportive too.  In any project of this magnitude, the only real hoops that need jumping through are those held up by lawyers!  And frankly, even those weren’t too high off the ground. 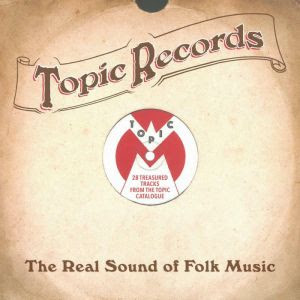 SPAZ: With a huge and influential back catalog, are you still just as eager to seek out and sign new artists that fit within the Topic Records formula?
GLEN: Absolutely.  As much as Topic has historically been steeped in the tradition, these are undeniably exciting times for Folk music – the boundaries are continually being pushed, new approaches are being formulated, often by a younger breed of artist or artists for whom Folk perhaps wasn’t their first passion.  Artists like Sam Lee, Eliza Carthy Lisa Knapp, Kitty Macfarlane, Sam Kelly & The Lost Boys and Lankum are investigating new spaces for Folk music and it’s perpetually exciting to us to hear what they’ll come up with.

SPAZ: The Folk Music scenes in the UK and America were very different, musically, yet they seemed to be coming from the same place, lyrically. For those listeners in the U.S. who may not be music archivists, where do the roots and influences of British Folk come from?
GLEN: From the man and woman in the street.  From the workers, from the beggars, from the sailors, from the troubadours.  Anyone who’s ever lived has a song, don’t they?  And those songs have been passed down from generation to generation, collected orally or transcribed, collected, archived and recorded, from sea shanties to jigs to protest songs to work songs to war songs to hornpipes.  The variation is inexhaustible and whilst there are still songs to be found, collected and recorded, Topic will still have a place.

SPAZ: Folk has always been political yet often times, there are many artists that have made it about things more personal. With Brexit and Donald Trump always making headlines, there isn’t a huge surge of political Folk or protest music taking over the airwaves. Has social media become a successful new platform for many artists these days?
GLEN: Absolutely.  I think, overall, the Folk world was slow to catch up with the possibilities availed by, particularly Instagram, Twitter, YouTube and Spotify but it’s hopefully now up to speed.  Five years ago, for a Folk artist, making a video for one of your songs was relatively unheard of but now almost all of them have their own YouTube channels and post regularly on Instagram.  It’s necessary to tick all the social media boxes these days if you want maximum coverage for your work and in doing so, you can not only have a lot of fun along the way but voice your opinions on a far wider platform than just concert stages.

SPAZ: What’s next for Topic Records?
GLEN: Well, as it’s the label’s 80th anniversary this year, we’re celebrating with a major concert at the Barbican in London and a wonderful photographic exhibition, TOPIC RECORDS: FOLK IN FOCUS, featuring iconic photos of the seminal artists who’ve helped sculpt British Folk music.  We’ve collected the best of Nic Jones into a definitive introduction compilation which includes two wonderful, unreleased 2013 studio tracks.  We’re reissuing John Tams’ multi-award-winning THE RECKONING album with bonus tracks and there’s also a fantastic new Martin Simpson album, ROOTED, out in September which could be his best. 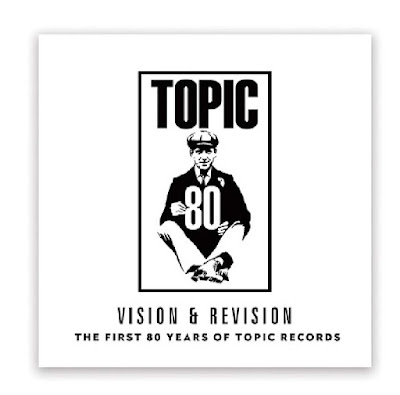