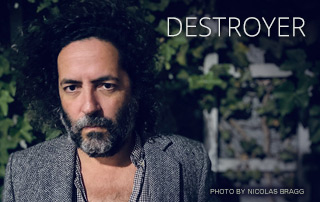 Throughout the ‘70s, ‘80s, and ‘90s, American Rock critics found it necessary to treat the Canadian music scene like a bad joke. When, where, why, and how Canada become a punchline for music journalists remains a mystery, but our northern neighbors finally had the last laugh. In the last two decades alone, bands like The New Pornographers, Arcade Fire, Bran Van 3000, Death From Above (1979), and Broken Social Scene have achieved great success in the U.S., both critically and commercially. The older music journalists that once roamed the halls of Rolling Stone, Creem, Circus, and other magazines have slipped away into the shadows, replaced by a new legion of critics who have never had an aversion to Canadian music makers (and probably don’t even realize that their predecessors had an issue in the first place!). The times they are (thankfully) a-changin’!

While Arcade Fire has certainly drawn the most attention, The New Pornographers are equally beloved by music fans. Not exactly a collective like Broken Social Scene, most of the members of The New Pornographers- have been involved with different projects before and during the band’s existence. Members include Neko Case (solo, Maow), Carl Newman (AC Newman, Superconductor, Zumpano), John Collins (The Evaporators), and Todd Fancey (Fancey, Limblifter). While he left The New Pornographers in 2017, guitarist/vocalist/songwriter Dan Bejar (Swan Lake, Hello Blue Roses) has been causing quite a stir with his musical project by the name of Destroyer. Releasing albums since 1996 (even before the formation of TNP), Destroyer’s recorded output has traveled down many different musical roads, showcasing the everevolving talents of Bejar. The last time we heard from Destroyer was the multi-layered 2020 album HAVE WE MET. A lot has happened in the world in the two years since that album was released, so we all sat back and waited to hear how everything had affected the music of Destroyer…

We are barely four months in to 2022 and Dan Bejar and Destroyer have delivered LABYRINTHITIS, an album that emerges from the global pandemic armed with a sense of hope and a briefcase full of melodies. An important part of Destroyer’s music – which Bejar has created with frequent collaborator John Collins – is the comforting familiarity of the group’s musical influences. Bathed in the memories of 1980s Synthpop and Post-Punk (with a dollop of New Wave), Bejar breaks down his musical inspirations, sands them down, gives them a new coat of shellac, and pieces it all back together. While the roots of Destroyer are showing, LABYRINTHITIS is far from a ‘retro’ album. With a unique and modern sound that continues to evolve, LABYRINTHITIS surprises the listener as it adds a new layer of emotion to Destroyer’s sound, allowing the songs to inhale and exhale while delivering tightly woven, darkly lit Pop songs. Highlights include the singles “Tintoretto, It’s For You”, “Eat The Wine, Drink The Bread”, and “June” as well as the Cure/New Order-influenced album opener “It’s In Your Heart Now”. In times like this, we all need to connect something that is both real and inspiring… and LABYRINTHITIS is your next new obsession. 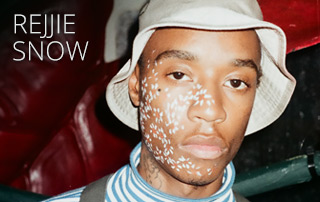 Born in Dublin, Ireland to a Nigerian father and an Irish-Jamaican mother, acclaimed rapper and songwriter Alexander Anyaegbunam is better known by his stage name Rejjie Snow. After attending Belvedere College SJ in Dublin, he relocated to the U.S. to attend Montverde Academy in Florida on a soccer scholarship. He also attended the Savannah College of Art and Design in Georgia and studied film and design. However, after a semester in Savannah, he left school and moved back to Dublin, Ireland. Instead of concentrating on a soccer career, he switched his focus to a career in music.

In 2013, Rejjie Snow released his debut EP, REJOVICH, which was an instant success. The EP featured the track “!992,” which received over a million streams on social media. His first official single, “All Around the World,” was released in 2015 and was followed by “Blakkst Skn,” which was released later that year. Signing with 300 Entertainment in 2016, he released several singles before issuing his mixtape THE MOON & YOU in 2017. Rejjie Snow released his full-length debut album, DEAR ANNIE, in 2018 to critical acclaim. With each release, Rejjie Snow began receiving great acclaim and earned quite a following. His singles – including “Egyptian Luvr,” “23,” “The Rain,” and more – have been embraced by music fans in and out of the Hip Hop community. In the four years since DEAR ANNIE, anticipation has been high for a new album from Rejjie Snow…

Four years on from DEAR ANNIE, Rejjie Snow returns to the album game with 2022’s BAW BAW BLACK SHEEP. The album is an audio delicatessen filled with nods to classic Soul, Pop, R&B, and Hip Hop while still looking forward. And album of integrity and inspiration, this is an album for modern Hip Hop heads AND for those that haven’t connected with anything in the genre since the release of the first albums by A TRIBE CALLED QUEST, JUNGLE BROTHERS, and DE LA SOUL in the late 1980s and early 1990s. Featuring the singles “Cookie Chips” (featuring MF DOOM & Cam O’bi) and “Mirrors” (featuring Snoh Aalegra & Cam O’bi), the album mixes genres – from Psychedelia to Soul to Pop – with ease, creating an aural landscape that is comforting, riveting, and inspiring. There’s an experimental edge that that will excite those looking for something new. Like a child lost in a dream, BAW BAW BLACK SHEEP introduces the listener a world of wonderment and imagination. 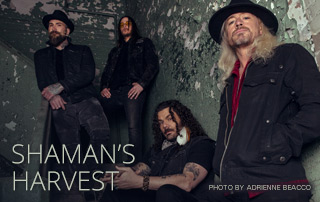 Formed in Jefferson City, Missouri in 1996, Shaman’s Harvest is a hard rock band that blends Post-Grunge, Metal, Southern Rock, and Alternative Rock into a heady brew topped off with melodic hooks and memorable guitar riffs. Originally founded by vocalist Nathan ‘Drake’ Hunt, guitarist Josh Hamler, and bassist Matt Fisher, the group has undergone several line-up changes over the course of their 26-year career – only Spinal Tap has had more drummers – but the band continues to persevere and grow stronger with each release. While the band has achieved plenty of attention via the release of their albums, they have endeared themselves to WWE fans everywhere for providing theme/entrance songs for Drew McIntyre (“Broken Dreams”) and Wade Barrett (“End of Days”) as well as providing “And Then There Was Darkness”, which was used to promote the Bray Wyatt vs. The Undertaker fight during WrestleMania 31. Shaman’s Harvest has also had music featured in films such as Legendary and No One Lives.

The band’s musical career began three years after their formation with the release of their debut album, LAST CALL FOR GOOSE CREEK (1999). The group followed that up with the albums SYNERGY (2002) and MARCH OF THE BASTARDS (2006). The group’s fourth album SHINE, was released in 2009 and was their most commercially successful yet, reaching #41 on Billboard’s Heatseekers chart. The band’s success really kicked in when they signed to Mascot Records and released SMOKIN’ HEARTS & BROKEN GUNS (2014), which reached #5 on the Heatseekers chart as well as #23 on the Rock Albums chart and #34 on the Indie Albums chart. RED HANDS BLACK DEEDS (2017) shot to the top of the Heatseekers chart, proving that the band were hotter than ever. Over the course of their career, the band has released numerous hit singles including “Dragonfly” (2009), “Here It Comes” (2013), “Dangerous” (2014), “In Chains” (2015), and “The Devil in Our Wake” (2018). When the COVID-19 pandemic brought the world to a halt, the band’s plans changed, and they spent more time working on new music. At the end of 2021, they released the singles ‘Bird Dog” and “Voices”, which gave fans a few peeks at their next album…

Shaman’s Harvest returns in 2022 with their seventh album, REBELATOR, an album that reveals a bolder, more confident band with plenty to say… and a few monstrous riffs to help drive the messages home. Original members Nathan Hunt and Josh Hamler lead the band through an album that leads the listener on a musical journey that stays within the Hard Rock realm but also takes in many other musical influences. Far from a screamer, Nathan Hunt’s vocals are rooted in the heartland – you can hear the dusty roads and blue-collar lifestyle in his voice, which makes them more identifiable to listener. But don’t think for a second that these songs are ‘soft’. Not a chance. Songs like “Under Your Skin”, “Pretty People”, and the previously mentioned “Bird Dog” and “Voices” showcase a band that could be pioneers of the Heartland Hard Rock scene. This is an album created by a band completely in touch with their roots yet still willing to take their sound in new directions without giving up their well-earned Hard Rock credentials. Welcome to the REBELATOR rebelution! 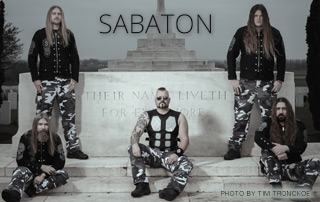