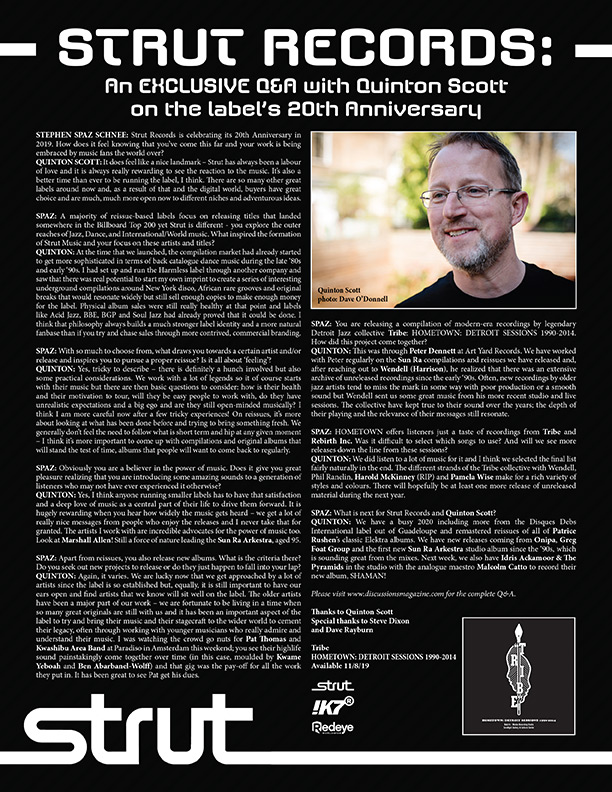 STEPHEN SPAZ SCHNEE: Strut Records is celebrating its 20th Anniversary in 2019. How does it feel knowing that you’ve come this far and your work is being embraced by music fans the world over?
QUINTON SCOTT: It does feel like a nice landmark – Strut has always been a labour of love and it is always really rewarding to see the reaction to the music. It’s also a better time than ever to be running the label, I think. There are so many other great labels around now and, as a result of that and the digital world, buyers have great choice and are much, much more open now to different niches and adventurous ideas.


SPAZ: A majority of reissue-based labels focus on releasing titles that landed somewhere in the Billboard Top 200 yet Strut is different – you explore the outer reaches of Jazz, Dance, and International/World music. What inspired the formation of Strut Music and your focus on these artists and titles?
QUNTON: At the time that we launched, the compilation market had already started to get more sophisticated in terms of back catalogue dance music during the late ‘80s and early ‘90s. I had set up and run the Harmless label through another company and saw that there was real potential to start my own imprint to create a series of interesting underground compilations around New York disco, African rare grooves and original breaks that would resonate widely but still sell enough copies to make enough money for the label. Physical album sales were still really healthy at that point and labels like Acid Jazz, BBE, BGP and Soul Jazz had already proved that it could be done. I think that philosophy always builds a much stronger label identity and a more natural fanbase than if you try and chase sales through more contrived, commercial branding.

SPAZ: How did you settle on the name Strut Records?
QUNTON: The name feels simplistic now compared to some of the newer labels around today but back in the late ‘90s it felt like a solid, confident name with obvious ‘70s connotations. I was originally looking at ‘Wah Wah’ but Dom Servini at Wah Wah 45s beat me to it when he launched around the same time! Love him, though…

SPAZ: With so much to choose from, what draws you towards a certain artist and/or release and inspires you to pursue a proper reissue? Is it all about ‘feeling’?
QUNTON: Yes, tricky to describe – there is definitely a hunch involved but also some practical considerations. We work with a lot of legends so it of course starts with their music but there are then basic questions to consider: how is their health and their motivation to tour, will they be easy people to work with, do they have unrealistic expectations and a big ego and are they still open-minded musically? I think I am more careful now after a few tricky experiences! On reissues, it’s more about looking at what has been done before and trying to bring something fresh. We generally don’t feel the need to follow what is short term and hip at any given moment – I think it’s more important to come up with compilations and original albums that will stand the test of time, albums that people will want to come back to regularly.

SPAZ: Fans of Strut Records may not understand all the issues you have to deal with in regards to licensing, mastering, and everything else that you need to do in order to give an album a proper reissue. From the moment you decide that you want to reissue something to the day it is released, what kind of time frame are we talking about? And is there a huge relief when the project is finally released?
QUNTON: It varies a lot. With, for instance, the HAITI DIRECT album that Hugo Mendez compiled a few years ago, it was a really long process to track down the licensors and patiently build their trust before being able to release the music. It took over two years to get to that point – they questioned the motives of a UK label coming in to use their music. Then, there were no tapes at all so we had to track down clean vinyl copies for every track to use as master sources. Other times, you might have a release which all comes from one rights owner and can fall together within two or three months. It is always satisfying to complete an album and it can certainly be a relief if a lot of money has been spent on a project upfront and if it then takes a long time to reach the finishing post. Thankfully, there are some patient people at our parent label, !K7! 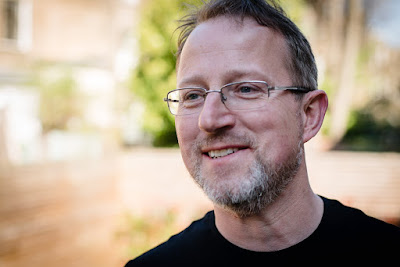 SPAZ: Obviously you are a believer in the power of music. Does it give you great pleasure realizing that you are introducing some amazing sounds to a generation of listeners who may not have ever experienced it otherwise?
QUNTON: Yes, I think anyone running smaller labels has to have that satisfaction and a deep love of music as a central part of their life to drive them forward. It is hugely rewarding when you hear how widely the music gets heard – we get a lot of really nice messages from people who enjoy the releases and I never take that for granted. The artists I work with are incredible advocates for the power of music too. Look at Marshall Allen! Still a force of nature leading the Sun Ra Arkestra, aged 95.

SPAZ: Apart from reissues, you also release new albums. What is the criteria there?  Do you seek out new projects to release or do they just happen to fall into your lap?
QUNTON: Again, it varies. We are lucky now that we get approached by a lot of artists since the label is so established but, equally, it is still important to have our ears open and find artists that we know will sit well on the label. The older artists have been a major part of our work – we are fortunate to be living in a time when so many great originals are still with us and it has been an important aspect of the label to try and bring their music and their stagecraft to the wider world to cement their legacy, often through working with younger musicians who really admire and understand their music. I was watching the crowd go nuts for Pat Thomas and Kwashibu Area Band at Paradiso in Amsterdam this weekend; you see their highlife sound painstakingly come together over time (in this case, moulded by Kwame Yeboah and Ben Abarbanel-Wolff) and that gig was the pay-off for all the work they put in. It has been great to see Pat get his dues. 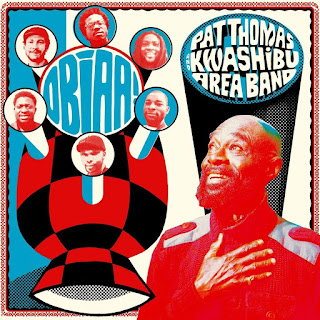 SPAZ: You are releasing a compilation of modern-era recordings by legendary Detroit Jazz collective Tribe: HOMETOWN: DETROIT SESSIONS 1990-2014. How did this project come together?
QUNTON: This was through Peter Dennett at Art Yard Records. We have worked with Peter regularly on the Sun Ra compilations and reissues we have released and, after reaching out to Wendell (Harrison), he realized that there was an extensive archive of unreleased recordings since the early ‘90s. Often, new recordings by older jazz artists tend to miss the mark in some way with poor production or a smooth sound but Wendell sent us some great music from his more recent studio and live sessions. The collective have kept true to their sound over the years; the depth of their playing and the relevance of their messages still resonate.

SPAZ: HOMETOWN offers listeners just a taste of recordings from Tribe and Rebirth Inc. Was it difficult to select which songs to use? And will we see more releases down the line from these sessions?
QUNTON: We did listen to a lot of music for it and I think we selected the final list fairly naturally in the end. The different strands of the Tribe collective with Wendell, Phil Ranelin, Harold McKinney (RIP) and Pamela Wise make for a rich variety of styles and colours. There will hopefully be at least one more release of unreleased material during the next year.

SPAZ: What is next for Strut Records and Quinton Scott?
QUNTON: We have a busy 2020 including more from the Disques Debs International label out of Guadeloupe and remastered reissues of all of Patrice Rushen’s classic Elektra albums. We have new releases coming from Onipa, Greg Foat Group and the first new Sun Ra Arkestra studio album since the ‘90s, which is sounding great from the mixes. Next week, we also have Idris Ackamoor & The Pyramids in the studio with the analogue maestro Malcolm Catto to record their new album, SHAMAN!

SPAZ: What are you currently spinning on your CD and/or record players?
QUNTON: I found a great ‘80s Lonnie Liston Smith single recently, ‘Never Too Late’. Not a rare one but really good classic ‘80s boogie. Also, really enjoying Ostinato’s POUR ME A GROG compilation of Funaná and Only Now’s CAPTIVITY EP on Souk which is unlike anything I have ever heard before – kuduro down a long dark tunnel! 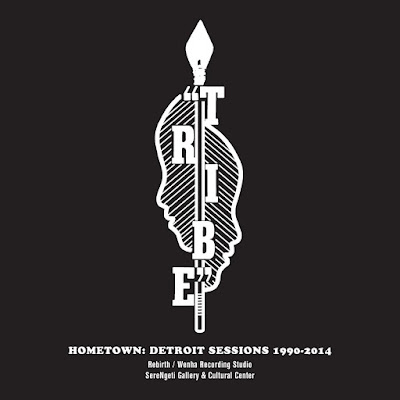