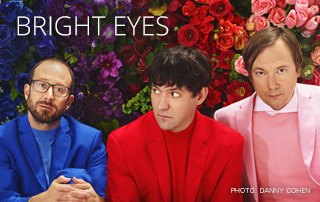 It has been nearly 25 years since Conor Oberst began his musical journey under the name Bright Eyes. He was originally a member of Omaha, Nebraska Indie Rock band Commander Venus, who split in 1997. Then, operating under the name Bright Eyes, he compiled A COLLECTION OF SONGS WRITTEN AND RECORDED 1995-1997, which was released at the beginning of 1998. At the end of the same year, the second Bright Eyes album, LETTING OFF THE HAPPINESS, hit the shops and raised the eyebrows of critics and music fans alike. By the time of 2000’s FEVERS AND MIRRORS, Conor and Bright Eyes – which now included Mike Mogis as part of the core line-up – were Indie and Alternative Rock darlings. The band reached their commercial zenith in 2005 with the album I’M WIDE AWAKE, IT’S MORNING, an album that featured recent band addition Nate Walcott. However, after the release of 2011’ THE PEOPLE’S KEY, Oberst called a time-out on the band and each member went their separate ways. Bright Eyes had taken hiatuses before but this one ended up lasting nearly a decade.

While Oberst’s main project was Bright Eyes, he also participated in many other projects including Desaparecidos, Monsters of Folk, and Better Oblivion Community Center along with his own solo releases. While fans embraced his other musical endeavors, their hopes of a new Bright Eyes album dimmed as time went on. However, unbeknownst to many, the idea of Bright Eyes’ return was hatched nearly three years ago. Oberst attended a Christmas party thrown by Walcott in 2017. He mentioned the idea to his bandmate and they both reached out to Mogis, who immediately agreed. A lot had changed since they released their previous album in 2011, but the trio accepted all the challenges that time had thrown at them and dived into a new Bright Eyes project. And then, as they prepared for the release of their latest opus, a worldwide pandemic hit….

DOWN IN THE WEEDS, WHERE THE WORLD ONCE WAS is the highly-anticipated Bright Eyes album, their first in nearly a decade. Their most collaborative release yet, DOWN IN THE WEEDS… is an album that finds Oberst at the wheel with Mogis and Walcott riding shotgun and occasionally steering the project into new and interesting directions. And while the album was in motion before the pandemic, this is a release that accurately reflects the mood of our times. Once you rip off the shrinkwrap and immerse yourself in DOWN IN THE WEEDS…, you’ll find anxiety, creativity, emotion, hope, and, flowing threw it all, the joy of making music together. Tracks like “Dance And Sing”, “Just Once In The World”, “Tilt-A-Whirl”, and “One And Done” represent just some of the moods on display on DOWN IN THE WEEDS…, an album that heralds the miraculous return of one of America’s most beloved Indie bands.

DOWN IN THE WEEDS, WHERE THE WORLD ONCE WAS