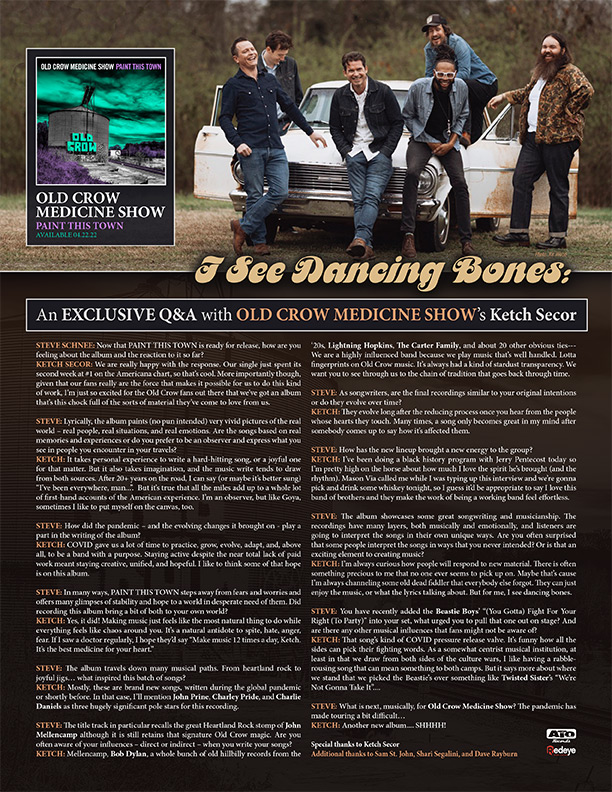 STEVE SCHNEE: Now that PAINT THIS TOWN is ready for release, how are you feeling about the album and the reaction to it so far?
KETCH SECOR: We are really happy with the response. Our single just spent its second week at #1 on the Americana chart, so that’s cool. More importantly though, given that our fans really are the force that makes it possible for us to do this kind of work, I’m just so excited for the Old Crow fans out there that we’ve got an album that’s this chock full of the sorts of material they’ve come to love from us.

STEVE SCHNEE: Lyrically, the album paints (no pun intended) very vivid pictures of the real world – real people, real situations, and real emotions. Are the songs based on real memories and experiences or do you prefer to be an observer and express what you see in people you encounter in your travels?
KETCH SECOR: It takes personal experience to write a hard-hitting song, or a joyful one for that matter. But it also takes imagination, and the music write tends to draw from both sources. After 20+ years on the road, I can say (or maybe it’s better sung) “I’ve been everywhere, man…”. But it’s true that all the miles add up to a whole lot of first-hand accounts of the American experience. I’m an observer, but like Goya, sometimes I like to put myself on the canvas, too.

STEVE SCHNEE: How did the pandemic – and the evolving changes it brought on – play a part in the writing of the album?
KETCH SECOR: COVID gave us a lot of time to practice, grow, evolve, adapt, and, above all, to be a band with a purpose. Staying active despite the near total lack of paid work meant staying creative, unified, and hopeful. I like to think some of that hope is on this album.

STEVE SCHNEE: In many ways, PAINT THIS TOWN steps away from fears and worries and offers many glimpses of stability and hope to a world in desperate need of them. Did recording this album bring a bit of both to your own world?
KETCH SECOR: Yes, it did! Making music just feels like the most natural thing to do while everything feels like chaos around you. It’s a natural antidote to spite, hate, anger, fear. If I saw a doctor regularly, I hope they’d say “Make music 12 times a day, Ketch. It’s the best medicine for your heart.”

STEVE SCHNEE: The album travels down many musical paths. From heartland rock to joyful jigs… what inspired this batch of songs?
KETCH SECOR: Mostly, these are brand new songs, written during the global pandemic or shortly before. In that case, I’ll mention John Prine, Charley Pride, and Charlie Daniels as three hugely significant pole stars for this recording.

STEVE SCHNEE: The title track in particular recalls the great Heartland Rock stomp of John Mellencamp although it is still retains that signature Old Crow magic. Are you often aware of your influences – direct or indirect – when you write your songs?
KETCH SECOR: Mellencamp, Dylan, a whole bunch of old hillbilly records from the ‘20s, Lightning Hopkins, The Carter Family, and about 20 other obvious ties—We are a highly influenced band because we play music that’s well handled. Lotta fingerprints on Old Crow music. It’s always had a kind of stardust transparency. We want you to see through us to the chain of tradition that goes back through time.

STEVE SCHNEE: As songwriters, are the final recordings similar to your original intentions or do they evolve over time?
KETCH SECOR: They evolve long after the reducing process once you hear from the people whose hearts they touch. Many times, a song only becomes great in my mind after somebody comes up to say how it’s affected them.

STEVE SCHNEE: How has the new lineup brought a new energy to the group?
KETCH SECOR: I’ve been doing a black history program with Jerry Pentecost today so I’m pretty high on the horse about how much I love the spirit he’s brought (and the rhythm). Mason Via called me while I was typing up this interview and we’re gonna pick and drink some whiskey tonight, so I guess it’d be appropriate to say I love this band of brothers and they make the work of being a working band feel effortless.

STEVE SCHNEE: The album showcases some great songwriting and musicianship. The recordings have many layers, both musically and emotionally, and listeners are going to interpret the songs in their own unique ways. Are you often surprised that some people interpret the songs in ways that you never intended? Or is that an exciting element to creating music?
KETCH SECOR: I’m always curious how people will respond to new material. There is often something precious to me that no one ever seems to pick up on. Maybe that’s cause I’m always channeling some old dead fiddler that everybody else forgot. They can just enjoy the music, or what the lyrics talking about. But for me I see dancing bones.

STEVE SCHNEE: You have recently added the Beastie Boys’ “(You Gotta) Fight For Your Right (To Party)” into your set, what urged you to pull that one out on stage? And are there any other musical influences that fans might not be aware of?
KETCH SECOR: That song’s kind of COVID pressure release valve. It’s funny how all the sides can pick their fighting words. As a somewhat centrist musical institution, at least in that we draw from both sides of the culture wars, I like having a rabble-rousing song that can mean something to both camps. But it says more about where we stand that we picked the Beastie’s over something like Twisted Sister’s “We’re Not Gonna Take It”….

STEVE SCHNEE: What is next, musically, for Old Crow Medicine Show? The pandemic has made touring a bit difficult…
KETCH SECOR: Another new album…. SHHHH!

Special thanks to Ketch Secor
Additional thanks to Sam St. John, Shari Segalini, and Dave Rayburn