In the world of Rock ‘n’ Roll, it is rare for a band to hit the 31-year mark with all original members intact. Big Head Todd & The Monsters is one of those rare beasts. Formed in Boulder, Colorado in 1986, Todd Park Mohr, Rob Squires and Brian Nevin (along with longtime member Jeremy Lawton, who joined the original trio in 2003) have achieved commercial and critical success, sold boatloads of albums, traveled the world and built up a huge, devoted following. And on their 2017 album NEW WORLD ARISIN’, they prove that they still have something to say.
Blending a variety of styles – from Blues to Americana to emotional Rock – Big Head Todd & The Monsters offer up an album that will more than satisfy their core fanbase and certainly pique the interest of those young whippersnappers who may not remember their 1993 breakthrough album SISTER SWEETLY. Bluesy riffs abound – especially on “Long Coal Train” and the title track – but Todd and his monster mates are far from a Blues band. The album’s opener, “Glow,” is a gorgeously melodic slice of Rock with a moody but anthemic vibe. “Damaged One” is a Rock song on the surface but could easily be a smash in the hands of a traditional Country rocker (if traditional Country rockers could have hits these days). The tracks on the album bleed American – they are pulled from the dirt of this great nation and are handspun into gold by this motley group of seasoned musicians 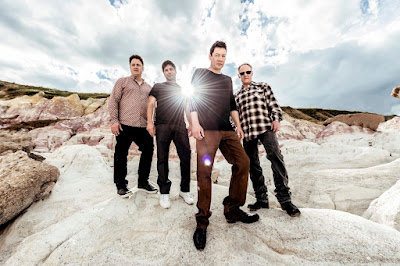 In the end, this platter – their first in three years – is both a continuation of the band’s musical legacy and a refreshing new start. This does not sound like a band operating on fumes – there is way too much energy and excitement in the grooves to be anything less than full throttle! Maybe it is time for you to reacquaint yourself with these musical goblins and their almighty leader!
Keep on truckin’
Stephen SPAZ Schnee