When spinning  singer/songwriter Buffy Saint-Marie’s 2017 album MEDICINE SONGS, you’ll realize that the art of protest music is NOT dead – it was just waiting for Buffy to release a new album! Mixing her early stark, acoustic Folk roots with Native American rhythms and a contemporary sound, this is an album that demonstrates her ability to remain true to her roots while also moving forward as an artist.
For those unfamiliar with Buffy’s career, here is a brief overview from the album’s press release, “Equal parts activist, educator, songwriter, performer and visual artist, Buffy Sainte–Marie is a champion for indigenous people and the environment through her music, art, education projects and by taking direct political action. One
of the most enduring and popular Native American performers, her music has touched millions of people around the world. From her start in New York City’s Greenwich Village in the early 1960s alongside Leonard Cohen, Neil Young and Joni Mitchell, Buffy made a name for herself as a gifted songwriter, writing hits for Janis Joplin, Elvis Presley, Barbra Streisand and Neil Diamond. Her most well–known song is the Academy Award–winning “Up Where We Belong” from the FILM AN OFFICER AND A GENTLEMEN, but her most acclaimed song is “Universal Soldier,” one of the first anti–Vietnam war anthems to inspire a generation of activists.” 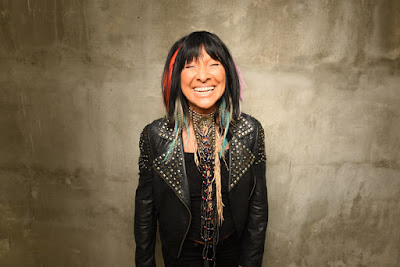 An artist that has been a part of Pop culture for over 50 years, you’d be forgiven to assume that Buffy’s MEDICINE SONGS is an album stuck in the past. While the album consists of new songs and interpretations of classics from her back catalog, it is not an album that spends it’s time looking backwards. Good art remains relevant and timeless and songs like “Universal Soldier,” “Now That the Buffalo’s Gone,” and “Little Wheel Spin and Spin” are just as relevant today as ever. And then you’ve got this version of the lesser-known “Starwalker,” which absolutely comes alive on MEDICINE SONGS.  New compositions like “You Got To Run” and “The War Racket” prove that Buffy has not softened over the years.
Available on both vinyl and CD including a digital download that includes seven additional tracks, MEDICINE SONGS is an album that we may not have expected but it certainly an album that we need!