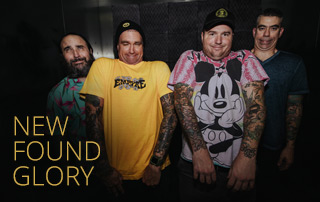 While melodic Pop-oriented Punk has existed since the late ‘70s, the term ‘Pop Punk’ (or ‘Punk Pop”) wasn’t widely used until bands like The Offspring, Green Day, Rancid, and Blink-182 brought the genre to the mainstream, selling millions of albums in the process. MTV and radio embraced this new movement that was as hook-filled as it was loud and aggressive. It is hard to tell whether Pop Punk was a reaction against the slick Pop and smooth R&B that filled the charts at the time or a full-on musical revolution but whatever happened, happened. Another band that made their mark in 1997 was New Found Glory, the Coral Springs, Florida-based band that seemed to have a never-ending supply of anthems for the Punk kids. Within two years of their debut EP, the band were one of the biggest Pop Punk bands in the land.

New Found Glory’s first full-length album, Nothing Gold Can Stay (1999) set the wheels in motion and by 2000, they had signed to Drive-Thru Records and released their self-titled second album. Over the next two decades, the band has released a series of hit records and spent plenty of time on the road, promoting their albums and entertaining audiences everywhere. They signed with Hopeless Records in 2014 and released Resurrection. The band returned three years later with Make Me Sick.  In 2019, they released the third in their From The Screen To Your Stereo series. Unlike many of their Pop Punk contemporaries, New Found Glory have shown no signs of slowing down.

Forever + Ever x Infinity is their 2020 album and their 10th studio album of original material (the band’s catalog also includes covers albums, live releases, EPs, and a few ‘hits’ collections to boot). The songs on this new release combine the spirit of classic New Found Glory with the spit of heavy Rock. The melodies still soar, but the guitars have a meaner bite. The songs still come fast and furious, but the guitars have a lean Metal-like chug-chug that makes each song hit harder but without causing any damage to the listener. Produced by Steve Evetts, the album features key tracks like “Himalaya”, “Shook By Your Shaved Head”, and the first single “Greatest Of All Time”. Forever + Ever x Infinity, amen!