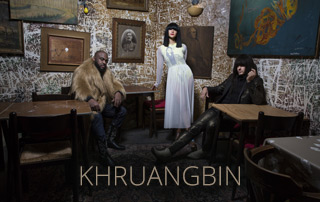 Formed in Houston, Texas in 2009, Khruangbin is composed of bassist Laura Lee, guitarist Mark Speer, and drummer Donald ‘DJ’ Johnson. The band’s origins reach back to 2004 when Speer and Johnson met while playing in a church Gospel band. Three years on, Speer met Lee and he encouraged her to learn to play bass. They both ended up playing in Yppah’s live touring band. This experience encouraged the Speer and Lee to create original music together. The duo’s experimentation led to a unique Psychedelic sound that was bass-heavy and rooted in World Music. Speer brought in his old friend Johnson and Khruangbin (Thai for ‘flying engine’ or ‘airplane’) was born. The band’s initial musical output relied on the interplay between the instruments and vocals were not prominently featured on their recordings.

The trio’s first release was the 2014 EP THE INFAMOUS BILL, followed by their 2015 full-length debut album THE UNIVERSE SMILES UPON YOU. Influenced by Thai music, the album was nearly impossible to classify and defied all genres. Regardless, it was warmly embraced by music fans and critics. The band’s second album, CON TUDO EL MUNDO (2018), added Spanish and Middle Eastern influences, pushing the band further away from genre classification and making them one of the most riveting bands of the era. Playing small clubs and huge festivals alike, Khruangbin continued to tour and build a devoted audience. In 2019, they took a short break and focused on creating material for their next album.

Now, in 2020, Khruangbin return with their third album, MORDECHAI. Unsurprisingly, the trio adds new elements to their evolving sound including a stronger reliance on vocals. While the idea of emphasizing more vocals than usual on a Khruangbin album may seem to go against the flow of their previous releases, one spin of MORDECHAI and it all makes sense. This isn’t an album that finds the trio ‘selling out’ and aiming for the Pop charts. The vocals are a natural addition to their sound – they operate as instruments, adding a new layer of emotional depth to the songs. The grooves are as delectable as ever and the Psychedelic elements still keep the songs floating above the ozone, but the vocals help guide the listener through the ever-evolving musical world of Khruangbin. MORDECHAI is a unique listening experience that will keep you coming back for more helpings… and you will hear it differently with each spin. That is what music is all about.