In the late ‘70s, the Rock world was being turned on it’s head by Punk and New Wave. The pretentious ‘old guard’ (i.e. Prog rockers, Folk singer/songwriters, Pop stars, etc.) were
handed their walking papers by the press, who latched onto the shouty, belligerent Punk kids. By ’79, you were more likely going to read about the exploits of Sex Pistols, The Damned and The Clash before you’d stumble upon a review of ELP’s latest live gig. And by that time, reviews of ELP, Yes and the like were leaning towards scathing.
However, while the press fell over themselves to discover the latest Punk craze, Pub Rock and British Rhythm & Blues was also a happening thing.  Dr. Feelgood were already established and Nine Below Zero were on their way to becoming legendary. While not always recognized as such, The Inmates were certainly one of the best of the Pub/R&B bunch (in fact, they still are!). With Cherry Red’s three CD box set, THE ALBUMS 1979-1982, The Inmates are finally receiving the credit and attention that they deserve. Containing the band’s first three studio albums (plus bonus tracks), this is a long over-due look at the band’s excellent early output. 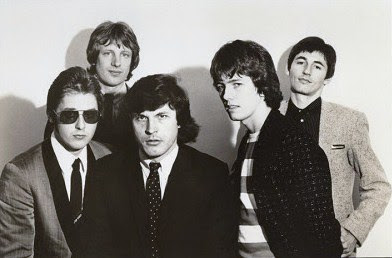 In 1979, there was nothing more inspiring than to be driving around town and hear the opening notes of “Dirty Water” blasting through car speakers. While the song was not penned by the band – it was written by Ed Cobb and originally recorded by The Standells in 1965 – The Inmates made it their own.  It also received plenty of airplay on ‘Modern Rock/New Wave’ stations like KROQ in L.A. Taken from their debut album FIRST OFFENCE, “Dirty Water” was the band’s only hit in the U.S. Yet, like many bands, they had a load of tracks that could have been just as popular had they received airplay.  FIRST OFFENCE is a solid album from beginning to end. On the album, the band’s edgy Rock ‘n’ Roll is more ‘60s Rolling Stones than Punk Rock, although the energy of British music of that era is rushing through The Inmates’ veins. Bill Hurley’s vocals are Jagger-esque while the band’s authentic Rock steam offers up a mix of Stones and American Garage Rock. Sure, it’s retro, but Pub and R&B was always about traveling back to Rock’s roots. A mix of originals and covers, FIRST OFFENCE is nothing short of a great British R&B/Rock album. You can feel the sweat dripping from the speakers. Vic Maile’s production may not have transferred their live energy to the studio but he sure made them sound great!
1980’S SHOT IN THE DARK is also an energetic blast of pure Rock fun. Produced by Maile again, the band sounds more confident and their originals blend well with their choice of covers. Tracks like “(I Thought I Heard A) Heartbeat” and “Why, When The Love Has Gone” should have been big hits back in the day. While “Stop It Baby” sounds like a label-requested retread of “Dirty Water,” the rest of the album solid back to front. Their take on the Jagger/Richards rarity “So Much In Love” is ace. “Crime Don’t Pay,” “Sweet
Rain” and “Waiting Game” are other high points. Chartwise, the album didn’t perform as well as the debut but it is equally exciting and fun. The quality control level is quite high on the album, especially when the band attempts to add other influences beyond those that shaped FIRST OFFENCE.

Perhaps in a bid to achieve some commercial success, 1981’s HEATWAVE IN ALASKA blends the British R&B sound of the first two albums with touches of Rockabilly, Pub Rock and Pop. However, the album still retains the The Inmates’ rock ‘n’ roll swagger. Squeeze fans will take delight in the band’s Difford & Tilbrook-penned “On The Beat,” which is certainly quirky and closer to the Rockabilly feel of “Messed Around” than early Squeeze Pub rockers like “Cat On A Wall.” Though some of the tracks were influenced by the Rockabilly revival that was sweeping the UK at the time, the band sticks to their Pub/R&B roots for the most part. “You Can Bet (A Broken Heart)” – written by Phil Everly – is reminiscent of Ian Gomm’s early solo work. “Remember, I’ve Been Good To You” is a blissful slice of soulfulness from The ‘Mates. Even the band’s originals (penned, for the most part, by guitarist Peter ‘Gunn’ Staines) sound like Rock standards at this point.  Perhaps not as raw as FIRST OFFENCE, HEATWAVE IN ALASKA is yet another fine album by those chaps in The Inmates!

THE ALBUMS 1979-1982 is a trip back in time yet remains timeless in every way. If you love Dr. Feelgood, Nine Below Zero, Kursaal Flyers, Brinsley Schwarz, Tyla Gang and the rest of the scruffy Pub legends, then you need this.  It’s also perfect if you just love some great Rock ‘n’ Roll! 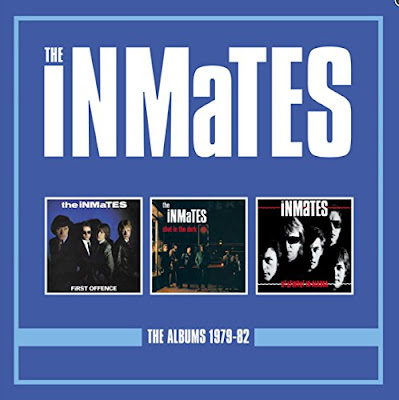