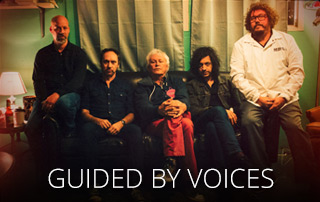 Remember back in the mid ‘80s when practically every R&B and Pop record released seemed to be performed or written by Prince? From his own albums and singles to songs by The Bangles, The Times, Cyndi Lauper, Vanity 6, The Three O’Clock, Sheena Easton and Sinead O’Connor, Prince was everywhere. It seemed as if he was the most prolific musician and songwriter in the world for at least the second half of the ‘80s… Well, folks, indie singer/songwriter Robert Pollard’s mega prolific output over the years makes Prince look like a lazy bastard!  But unlike Prince, the fruits of Pollard’s insane work ethic is not locked up in a dark vault somewhere, never to be heard by the public. In fact, just the opposite – Pollard has released hundreds of songs under his own name as well as under the names of the many side projects he’s been involved with including Circus Devils, Boston Spaceships, Ricked Wicky, Phantom Tollbooth, Teenage Guitar, and, most importantly, Guided By Voices. END_OF_DOCUMENT_TOKEN_TO_BE_REPLACED