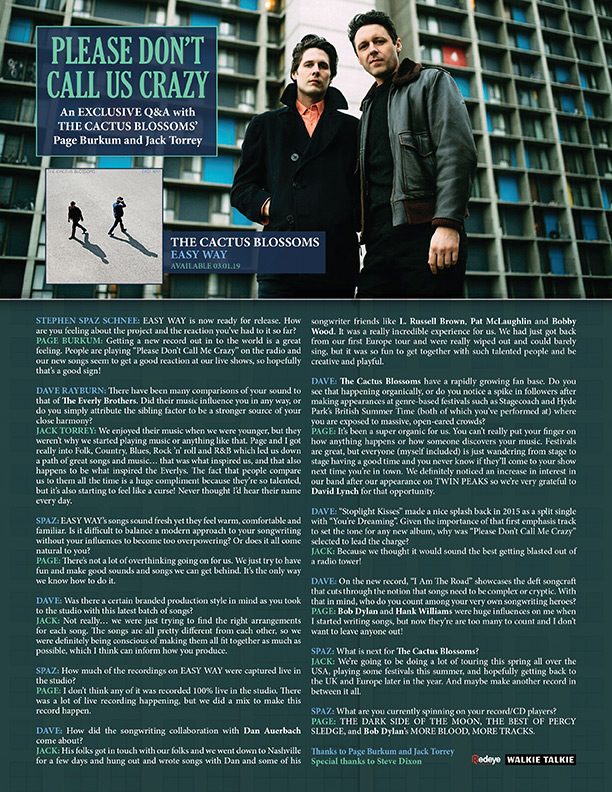 DAVE RAYBURN: There have been many comparisons of your sound to that of The Everly Brothers. Did their music influence you in any way, or do you simply attribute the sibling factor to be a stronger source of your close harmony?
JACK TORREY: We enjoyed their music when we were younger, but they weren’t why we started playing music or anything like that. Page and I got really into Folk, Country, Blues, Rock ’n’ roll and R&B which led us down a path of great songs and music… that was what inspired us, and that also happens to be what inspired the Everlys. The fact that people compare us to them all the time is a huge compliment because they’re so talented, but it’s also started to feel like a curse! Never thought I’d hear their name every day.

SPAZ: EASY WAY’s songs sound fresh yet they feel warm, comfortable and familiar. Is it difficult to balance a modern approach to your songwriting without your influences to become too overpowering? Or does it all come natural to you?
PAGE: There’s not a lot of overthinking going on for us. We just try to have fun and make good sounds and songs we can get behind. It’s the only way we know how to do it.

DAVE: Was there a certain branded production style in mind as you took to the studio with this latest batch of songs?
JACK: Not really… we were just trying to find the right arrangements for each song. The songs are all pretty different from each other, so we were definitely being conscious of making them all fit together as much as possible, which I think can inform how you produce.

DAVE: How did the songwriting collaboration with Dan Auerbach come about?
JACK: His folks got in touch with our folks and we went down to Nashville for a few days and hung out and wrote songs with Dan and some of his songwriter friends like L. Russell Brown, Pat McLaughlin and Bobby Wood. It was a really incredible experience for us. We had just got back from our first Europe tour and were really wiped out and could barely sing, but it was so fun to get together with such talented people and be creative and playful.

DAVE: The Cactus Blossoms have a rapidly growing fan base. Do you see that happening organically, or do you notice a spike in followers after making appearances at genre-based festivals such as Stagecoach and Hyde Park’s British Summer Time (both of which you’ve performed at) where you are exposed to massive, open-eared crowds?
PAGE: It’s been a super organic for us. You can’t really put your finger on how anything happens or how someone discovers your music. Festivals are great, but everyone (myself included) is just wandering from stage to stage having a good time and you never know if they’ll come to your show next time you’re in town. We definitely noticed an increase in interest in our band after our appearance on TWIN PEAKS so we’re very grateful to David Lynch for that opportunity.

DAVE: “Stoplight Kisses” made a nice splash back in 2015 as a split single with “You’re Dreaming”. Given the importance of that first emphasis track to set the tone for any new album, why was “Please Don’t Call Me Crazy” selected to lead the charge?
JACK: Because we thought it would sound the best getting blasted out of a radio tower!

DAVE: On the new record, “I Am The Road” showcases the deft songcraft that cuts through the notion that songs need to be complex or cryptic. With that in mind, who do you count among your very own songwriting heroes?
PAGE: Bob Dylan and Hank Williams were huge influences on me when I started writing songs, but now they’re are too many to count and I don’t want to leave anyone out!

SPAZ: What is next for The Cactus Blossoms?
JACK: We’re going to be doing a lot of touring this spring all over the USA, playing some festivals this summer, and hopefully getting back to the UK and Europe later in the year. And maybe make another record in between it all.

SPAZ: What are you currently spinning on your record/CD players?
PAGE: DARK SIDE OF THE MOON, BEST OF PERCY SLEDGE, and Bob Dylan’s MORE BLOOD MORE TRACKS.