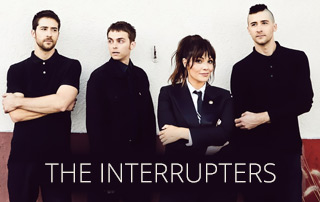 Los Angeles, California-based punk and ska band The Interrupters’ may have formed in 2011, but lead singer Aimee Interrupter – born Aimee Allen – began her musical journey nearly a decade before that when she began fronting bands in her teens while still living in Montana. Moving to L.A. when she was 18, she immediately fell in with the L.A. music scene. Her band Forum split up after a deal with MCA fell through and a solo deal with Elektra Records resulted in an unreleased album, but she remained focused and didn’t give up. She began to collaborate with several writers and musicians including Linda Perry, Scott Russo (Unwritten Law), Sublime with Rome, Jimmy Cliff, the Mad Caddies, and many others. She also released her debut solo album, A LITTLE HAPPINESS, in 2009. While touring for her solo album, she met guitarist Kevin Bivona and his younger twin brothers Justin (bass) and Jesse (drums).  The three brothers left their band The Telecasters and they joined forces with Aimee as The Interrupters.

The Interrupters signed with Hellcat/Epitaph Records and released their Tim Armstrong-produced self-titled debut album in 2014. The band’s blending of punk and ska – with a touch of Joan Jett-inspired attitude – connected with music fans and The Interrupters were off and running.  After touring the album, the band went back into the studio with Armstrong, who produced their second album SAY IT OUT LOUD. The album was even more successful than their debut, charting at #38 on Billboard’s Top Rock Albums chart. Armstrong manned the controls again for the group’s third album, FIGHT THE GOOD FIGHT, and The Interrupters’ career trajectory continued to move forward. With the band going from strength to strength, they plotted their biggest tour yet, a trek that would put them in front of more people than ever before. However, the universe had different plans and the COVID-19 pandemic stepped and put the kibosh on everyone’s plans. However, the group refused to remain idle. In 2021, they released the album LIVE IN TOKYO (recorded in 2019), a documentary entitled THIS IS MY FAMILY, and began writing songs for their next album…

While it is rumored that the band spent their free time writing close to 80 songs, they pulled the cream of the crop for their fourth studio album, IN THE WILD, released on August 5, 2022. Working in their own home studio, this is the band’s first album produced by guitarist Kevin Bivona. However, their relationship with longtime friend/producer Tim Armstrong remains intact and he is one of the guest musicians on the album alongside Rhoda Dakar (The Selecter), The Skints, and members of Hepcat. The resulting album is a fun, confident, and relaxed release although the band’s ska/punk power is still present and accounted for. The first single from the album, “In the Mirror,” is the perfect gateway int an album that finds the band at the top of their songwriting powers, offering up a mix of soon-to-be-classic tunes that will thrill longtime fans and open the doors for new fans to come in and explore the musical world of The Interrupters. Other highlights include “Jailbird,” “Anything Was Better,” and “As We Live.” It’s been four years since we heard some new music from this quartet, but IN THE WILD has been worth the wait.