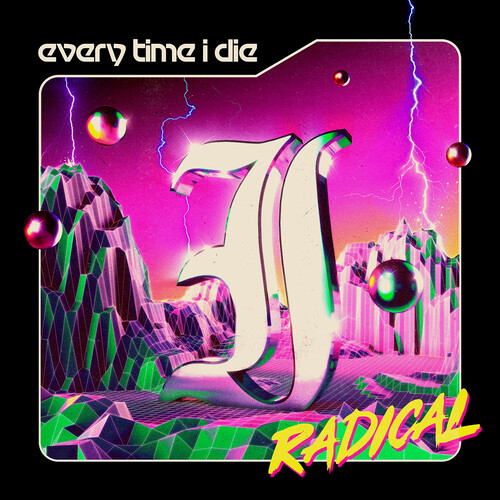 Metalcore band Every Time I Die was formed in Buffalo, New York in 1998. Founded by Jordan Buckley (lead guitar), Andy Williams (rhythm guitar), Keith Buckley (vocals), Mike Novak (drums), and John McCarthy (bass), the group released their first EP, THE BURIAL PLOT BIDDING WAR, in 1999. By the year 2000, McCarthy had been replaced by Aaron Ratajczak and the band entered the studio to begin work on their debut album, LAST NIGHT IN TOWN (2001). The album was positively received by critics and music fans alike, which fed into the excitement of their next album HOT DAMN! (2003), which featured new bassist Stephen Micciche. The band’s touring schedule was including headlining and co-headlining tours in the U.S. and overseas. And things were only going to get busier…

The year 2005 brought a new album, GUTTER PHENOMENON, and a new bass player (Kevin Falk) and ore accolades from music critics and their growing fanbase around the world. The critically-acclaimed THE BIG DIRTY (2007) raised their commercial profile even higher and featured guitarists Buckley and Williams handling bass duties in the studio. NEW JUNK AESTHETIC (2009) was the last album to feature drummer Novak and the first to include new bassist Josh Newton. 2012’s EX LIVES was another highly acclaimed album in their catalog and their first to feature new drummer Ryan Leger. The album FROM PARTS UNKNOWN (2014) was one of the best reviewed albums in their catalog and featured the return of bassist Stephen Micciche. LOW TEENS (2016) received even more acclaim, making Every Time I Die one of the most critically lauded and successful bands of the Metalcore genre. After more successful touring, the band headed into the studio to work on their next album. And then the worldwide COVID-19 pandemic hit…

Finished right before lockdowns began in the U.S. RADICAL sat in limbo, awaiting a safe time for the band to tour in support of the album. Now that lockdowns have lifted in many parts of the U.S. and the rest of the world, the band realized that the time was right to bring the album to the masses. The album features powerful anthems such as “Post-Boredom,” “Planet Shit,” “A Colossal Wreck,” “Desperate Pleasures,” and “AWOL”. However, don’t expect your average Hardcore onslaught with RADICAL since Every Time I Die is not your average Hardcore band. Songs like “Sly” reveal their unique approach, which has been a big part of what has helped the band build an international audience. While the album was completed before the pandemic, the overall ‘vibe’ of the album feels like the music is dragging the listener out of hopelessness and into a confused world that is drizzled with just a small dollop of hope. And isn’t that the point of Rock ‘n Roll? You’ve got to scream and shout every once in a while. Life isn’t always about lollipops and rainbows and Every Time I Die are here to remind you about it.

EVERY TIME I DIE 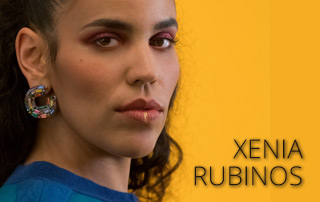 It’s been a while since we’ve heard from Xenia Rubinos. The Hartford, Connecticut-born singer, songwriter, and multi-instrumentalist raised a lot of eyebrows with the release of her full-length debut album, BLACK TERRY CAT, in 2016. Unlike many of her contemporaries, Xenia Rubinos’ album was an unpredictable mix of R&B, Jazz, Pop, and Hip-Hop influences filtered through an artist with a unique voice and a gift for melodies. The album received critical acclaim and introduced Xenia to a larger audience. Listeners were caught off-guard by the emotional depth and power of her music, and she became one of the most talked about artists on the scene. But it didn’t start there…

Born to a Puerto Rican mother and a Cuban father, her musical influences were classical composers such as Prokofiev and Ravel. Growing up, her father introduced Xenia to salsa, merengue, rumba, and other Latin musical styles. On her own, she discovered Hip-Hop, R&B, and, more importantly, Jazz, which inspired her to study the genre at Berklee College of Music in Boston, Massachusetts. Armed with her love of all genres of music and a deeper knowledge of creating art, she released MAGIC TRIX, her debut album, independently in 2013. The album impressed critics, music lovers, and even record label execs. Signing with Anti- Records, Xenia Rubinos’ next album, the previously mentioned BLACK TERRY CAT (2016) introduced her talents to a larger audience that has been anxiously awaiting her next musical outing…

Xenia Rubinos’ third album, 2021’s UNA ROSA is exactly what you would expect from her: unpredictable and fresh. While still very accessible to Pop audiences, the album embraces her more eclectic side, offering up an album of songs that strip away the formulaic edge of Pop and adds more of her early influences like Latin and Jazz while also experimenting with new rhythms and sound. While a few songs may sound unconventional on first listen, they reveal their charms over repeated spins. Moody, atmospheric, thoughtful, and melodic, the album is filled with songs that seduce you and overpower your senses. Highlights include “Worst Behavior”, “Did My Best”, “Sacude”, “Don’t Put Me in the Red” and “Cógelo Suave”. But those tracks only represent a small part of what Xenia Rubinos offers on this bravely eclectic release. 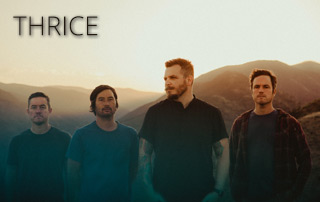 Post-Hardcore band Thrice was formed in Irvine, California in 1998 by high schoolers Dustin Kensrue (guitar/vocals) and Teppei Teranishi (lead guitar). The duo quickly recruited Eddie Breckenridge (bass) and his brother Riley (drums), and the band’s line-up was complete. The released their limited edition first EP, FIRST IMPRESSIONS, in 1999. The following year, they issued their debut full-length album IDENTITY CRISIS. The band began to build a buzz, picking up some high-profile support gigs and capturing the attention of record labels. Signing with Sub City/Hopeful, the album was reissued in 2001 and the band toured with several bands, raising their commercial profile even more. Unbeknownst to the band, things were only going to get better and busier for them…

Their next album, ILLUSION OF SAFETY, was released in 2002. They began the year as the opening act for other bands but within a few months, Thrice became headliners. Moving over to Island Records, they released the album THE ARTIST IN THE AMBULANCE in 2003. The following year came the CD/DVD package IF WE COULD ONLY SEE US NOW, which featured audio rarities and a documentary. The band continued to tour and release albums such as VHEISSU (2005), THE ALCHEMY INDEX, VOLUMES I & II (2007), THE ALCHEMY INDEX, VOLUMES III & IV (2008), BEGGARS (2009), and MAJOR/MINOR (2011). After a dozen years of constant activity, Thrice took a five-year hiatus before reconvening and releasing their ninth studio album, TO BE EVERYWHERE IS TO BE NOWHERE, in 2016. Signing with the iconic label Epitaph Records, the band released PALMS in 2018, which proved to be yet another success and solidified the band’s reputation as one of modern Alternative Rock’s most exciting bands.

The band returns in 2021 with HORIZONS/EAST, an album that is just as passionate as anything Thrice has released in their 23-year career. Whatever you think post-Hardcore is, think again. On this platter, Thrice turns the genre on its head and as they create their own little musical universe. The album comes as the global pandemic continues its monthly ebb and flow, and the emotions that it brings are reflected on HORIZONS/EAST. The dynamic musical arrangements mimic everything from hope to desperation, confusion to aggression. This is an album of many layers, some of which only reveal themselves over several listens. Their edge is still intact, but these four musicians have matured together, and their musical chemistry allows more atmosphere and emotion to infiltrate the music. Songs like “The Color of the Sky”, “Summer Set Fire to the Rain”, “Robot Soft Exorcism”, “Dandelion Wine”, and “Scavengers” stand out as songs that bridge the gap between what was, what is, and what will be. However, every listener is going to experience the album differently depending on their own life experience. Music tells our stories, and Thrice is here to make sure we all are heard. 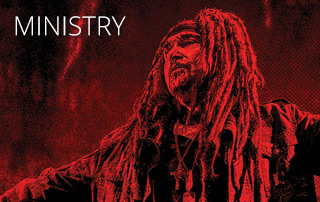 It has been 40 years since Al Jourgensen founded the band Ministry… and what a long, strange tip it’s been! Originally part of the Chicago alternative/punk scene, he eventually switched his attention to an aggressive synth-based sound. Forming the band Ministry in 1981, the band’s dark synth groove caught the attention of Arista Records, who eventually signed the band. By the time their debut album, WITH SYMPATHY, was released in 1983, the label had ‘encouraged’ the band to go in a more commercial synthpop direction. While the album was successful, Jourgensen’s relationship with Arista was not and Ministry left the label. And that is where things began to change for the band. In a short amount of time, the group went from synthpop hopefuls to industrial music pioneers and never looked back.

Although Jourgensen has remained the sole constant member of Ministry, he’s managed to work with some pretty talented musicians including Paul Raven, Martin Atkins, William Tucker, Bill Rieflin, and many others. Ministry’s darker music began with albums like TWITCH (1986) and THE LAND OF RAPE AND HONEY (1988). The band’s popularity rose with the release of albums like THE MIND IS A TERRIBLE THING TO TASTE (1989) and PSALM 69: THE WAY TO SUCCEED AND THE WAY TO SUCK EGGS (1992). Everything on top of those albums – including FILTH PIG (1996), DARK SIDE OF THE SPOON (1999), AND ANIMOSITISOMINA (2003) – were icing on the cake. However, Jourgensen had a very busy schedule with many side projects including Revolting Cocks, Lard, and Buck Satan and the 666 Shooters and he finally shut down the Ministry machine in 2008. However, he realized that Ministry still had a lot to say so he revived the band name in 2011 and a decade later, he is still going strong.

MORAL HYGIENE is Ministry’s fourth album since they rose from the dead and their 15th studio release overall. The album is the follow-up to 2018’s acclaimed AMERIKKKANT release and features guest appearances from former Dead Kennedys frontman Jello Biafra (“Sabotage is Sex”), singer and rapper Arabian Prince (“Alert Level”), and British singer/guitarist Billy Morrison on a cover of the Stooges’ “Search and Destroy”. Lyrically, the album picks up where AMERIKKANT left off but is less angry and confused and more reflective and emotionally powerful. Every song offers new surprises, taking the listener on musical journeys that criss-cross several genres in just a span of a few minutes. Along with the aforementioned tracks, other standouts include “Good Trouble”, “Broken System”, and “We Shall Resist”. While not an easy listen for those raised on the type of peppy pop ear candy that can be found in the Top 40, MORAL HYGIENE is a reminder that music can sound dangerous and still be good for the soul.