Deal with Alliance Entertainment has led to BinaryBots’ products being listed on Walmart.com and they are due to be sold by more US retailers in the new year. 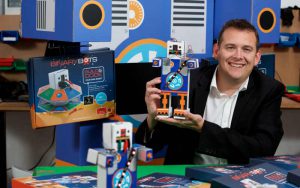 Robotics toy company BinaryBots is ready to attack the US market thanks to a deal with one of the biggest distribution companies in the US.

The deal with Alliance Entertainment has led to BinaryBots’ products being listed on Walmart.com and they are due to be sold by more US retailers in the new year.

The build-your-own robots are designed to teach children how to code and come with sensors, lights and speakers. Children then use a BBC micro:bit to program them to move, make sounds and even respond to touch.

Leeds-based BinaryBots was created by CEO Chris Burgess who has received backing from NPIF-Mercia Equity Finance, which is managed by Mercia Fund Managers and part of the Northern Powerhouse Investment Fund.

“The US is the world’s biggest toy market and this deal has given us a direct route into it. We are proud to be working with Alliance Entertainment and showcasing British innovation in an international market,” Burgess said.

“We want to be leading the charge on engineering and coding, and flying the flag for Yorkshire in this exciting sector.”

Burgess said the US government’s move to expand teaching of STEM subjects (science, technology, engineering and mathematics) had created greater demand for educational toys like BinaryBots and the robots had attracted a lot of attention at recent major US trade shows.

“BinaryBots have been well received in the UK and, with the backing of our investment, they are now ready to take on America.”

This feature was written by Jonathan Symcox. The original article can be read here