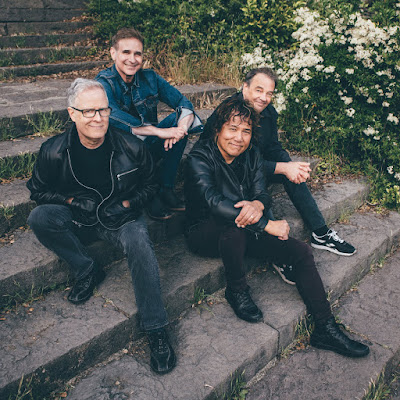 Some things are inevitable – someone from the ‘older generation’ (age 50+) will hear a classic ‘60s Pop tune on the radio and utter, “They don’t make music like this anymore!” His friends will nod in agreement or offer a fist bump and, once the song is over, they go off to take a nap. I’m sure that scenario is being played out somewhere in this world at this very moment…


Well, I’m here to tell you – without hesitation – that they DO still make music like that. And by ‘they,’ I mean THE RUBINOOS. And by ‘music like that,’ I mean their brand-new album FROM HOME. And before I offer a few more details, I just wanted to say up front that this is an album that will restore your faith in everything that you loved about music growing up and everything you love about music now.  It is an album that is as fresh as a warm summer breeze and as comforting as your favorite blanket on a cold winter’s eve.

Now, let me tell you WHY everything I say is true!  Oops, I mean #true. I sometimes forget to add the hashtag, which has somehow replaced emotion and exclamation points in social media…

Vocalist/guitarist Jon Rubin and guitarist/vocalist Tommy Dunbar came together to make music in 1970. Drummer Donn Spindt joined the following year. Initially playing covers at parties, the band eventually began to incorporate original material – mostly written or co-written by Dunbar – into their set. By 1977, they had signed to Beserkeley Records and issued their self-titled debut album, THE RUBINOOS. Fresh, energetic, joyful, and filled with youthful exuberance, the album was embraced by lovers of ‘60s and ‘70s Pop music and Power Pop fans. Their cover of “I Think We’re Alone Now” even made a dent in the charts. Two years later, their even-better sophomore album BACK TO THE DRAWING BOARD was released. With this album, the band were fully embraced by the Power Pop crowd, who have continually held the band in high esteem for over four decades.

Bassist Royce Ader exited the band after the second album and Jon, Tommy, and Donn brought in bassist/vocalist Al Chan to record what was supposed to be their third album. Things got a little wonky and those recordings wouldn’t surface for another 13 years (as THE BASEMENT TAPES, a very worthy follow-up to BACK TO THE DRAWING BOARD). While the band remained friends, Jon and Tommy briefly left Donn and Al behind and took the Rubinoos in a different direction for the PARTY OF TWO EP and tracks recorded for the REVENGE OF THE NERDS soundtrack.  Eventually, The Rubinoos returned to their core Power Pop sound in ’98 with PALEOPHONIC and, since then, have released an album every five years or so.

With their 2019 album FROM HOME, there is no doubt that The Rubinoos – Jon, Tommy, Donn, and Al – have created a full-length platter that matches the absolute joy of their first two albums. Produced by Chuck Prophet (Green On Red and solo sensation), the album enhances the charm and songwriting smarts of those first two records and adds depth and maturity to the mix. Situated somewhere between the Bubblegum Pop of The Archies and Lancelot Link & The Evolution Revolution and the more sophisticated Rock sounds of the British Invasion (The Beatles, The Kinks, etc.), The Rubinoos have created a musical universe that defies all logic: they seem to be out of step with the times yet remain utterly timeless.

The Rubinoos’ FROM HOME is a reminder of just how important music can be in difficult times. Instead of offering up a collection of songs that remind you of the horrors of this world, they serve up an album that makes you feel so good be alive. FROM HOME is an album that sounds great blasting out of your car’s speakers as you cruise down Main Street yet it also sounds fab while you are relaxing at home with a glass of your favorite beverage and a bag of pretzels that are way past their sell-by date.  FROM HOME is a love letter to Rock ‘n’ Roll and a thank you to their fans. Best of all, FROM HOME is a career-defining work of Power Pop art that may give the genre some well-deserved street cred again. Maybe.
The tracks on the album – penned by Dunbar and Chuck Prophet – are perfect additions to their beloved catalog. From the Garage rock of “Do You Remember” to the eye-misting “Heart For Sale,” this is an album that gladly acknowledges the band’s past without reveling in it. “How Fast” is an infectious, hook-filled rocker. “Honey From The Honeycombs” and “Phaedra” are as delicious as any track from their first two albums. “Do I Love You” is a sweet ‘70s Soul-influenced track that recalls classics like “Hard To Get”. “Rocking In Spain” finds The Rubes at their most Glammiest (is Glammiest even a word?) “January” (NOT the Pilot song), “Miss Alternate Universe,” and “Pretty Close” are pure gems. The wistful “Watching The Sun Go Down” ends this truly wonderful album and is inspiring enough to force you to get up and start the whole damn thing from the beginning again.

Thank God that someone forgot to tell The Rubinoos that their talents were supposed to diminish over time because with FROM HOME, they reveal themselves to be better than ever. For example, Rubin’s voice is just as pure as it was on their debut but there is much more depth and passion than ever before. This will certainly end up on many Top 10 lists at the end of the year. Don’t be surprised if it ends up at #1 on most of those lists.

Leave it to The Rubinoos to deliver life-affirming music when everything around us seems so dark and dismal. So, let’s stop the bickering about politics and Power Pop and turn up the volume on FROM HOME. 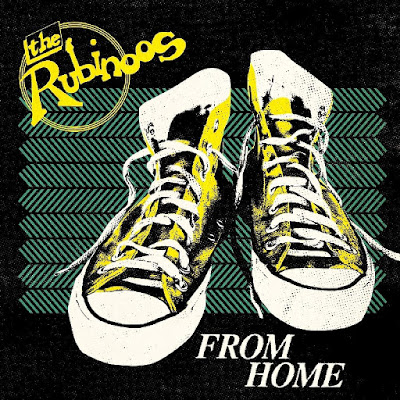