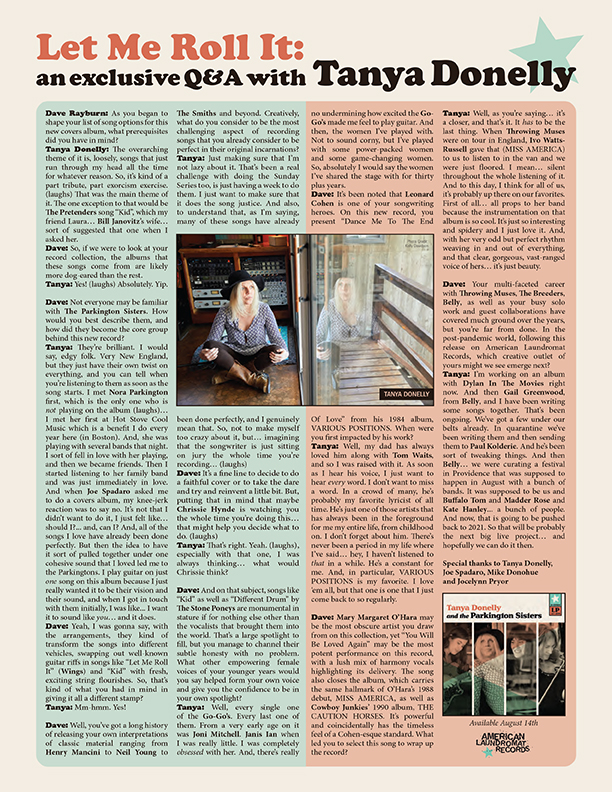 Dave Rayburn: As you began to shape your list of song options for this new covers album, what prerequisites did you have in mind?
Tanya Donelly: The overarching theme of it is, loosely, songs that just run through my head all the time for whatever reason. So, it’s kind of a part tribute, part exorcism exercise. (laughs) That was the main theme of it. The one exception to that would be The Pretenders song “Kid”, which my friend Laura… Bill Janovitz’s wife… sort of suggested that one when I asked her.

Dave: So, if we were to look at your record collection, the albums that these songs come from are likely more dog-eared than the rest.
Tanya: Yes! (laughs) Absolutely. Yip.

Dave: Not everyone may be familiar with The Parkington Sisters. How would you best describe them, and how did they become the core group behind this new record?
Tanya: They’re brilliant. I would say, edgy folk. Very New England, but they just have their own twist on everything, and you can tell when you’re listening to them as soon as the song starts. I met Nora Parkington first, which is the only one who is not playing on the album (laughs)… I met her first at Hot Stove Cool Music which is a benefit I do every year here (in Boston). And, she was playing with several bands that night. I sort of fell in love with her playing, and then we became friends. Then I started listening to her family band and was just immediately in love. And when Joe Spadaro asked me to do a covers album, my knee-jerk reaction was to say no. It’s not that I didn’t want to do it, I just felt like… should I?… and, can I? And, all of the songs I love have already been done perfectly. But then the idea to have it sort of pulled together under one cohesive sound that I loved led me to the Parkingtons. I play guitar on just one song on this album because I just really wanted it to be their vision and their sound, and when I got in touch with them initially, I was like… I want it to sound like you… and it does.

Dave: Yeah, I was gonna say, with the arrangements, they kind of transform the songs into different vehicles, swapping out well-known guitar riffs in songs like “Let Me Roll It” (Wings) and “Kid” with fresh, exciting string flourishes. So, that’s kind of what you had in mind in giving it all a different stamp?
Tanya: Mm-hmm. Yes!

Dave: Well, you’ve got a long history of releasing your own interpretations of classic material ranging from Henry Mancini to Neil Young to The Smiths and beyond. Creatively, what do you consider to be the most challenging aspect of recording songs that you already consider to be perfect in their original incarnations?
Tanya: Just making sure that I’m not lazy about it. That’s been a real challenge with doing the Sunday Series too, is just having a week to do them. I just want to make sure that it does the song justice. And also, to understand that, as I’m saying, many of these songs have already been done perfectly, and I genuinely mean that. So, not to make myself too crazy about it, but… imagining that the songwriter is just sitting on jury the whole time you’re recording… (laughs)

Dave: It’s a fine line to decide to do a faithful cover or to take the dare and try and reinvent a little bit. But, putting that in mind that maybe Chrissie Hynde is watching you the whole time you’re doing this… that might help you decide what to do. (laughs)
Tanya: That’s right. Yeah. (laughs), especially with that one, I was always thinking… what would Chrissie think?

Dave: And on that subject, songs like “Kid” as well as “Different Drum” by The Stone Poneys are monumental in stature if for nothing else other than the vocalists that brought them into the world. That’s a large spotlight to fill, but you manage to channel their subtle honesty with no problem. What other empowering female voices of your younger years would you say helped form your own voice and give you the confidence to be in your own spotlight?
Tanya: Well, every single one of the Go-Go’s. Every last one of them. From a very early age on it was Joni Mitchell. Janis Ian when I was really little. I was completely obsessed with her. And, there’s really no undermining how excited the Go-Go’s made me feel to play guitar. And then, the women I’ve played with. Not to sound corny, but I’ve played with some power-packed women and some game-changing women. So, absolutely I would say the women I’ve shared the stage with for thirty plus years.

Dave: It’s been noted that Leonard Cohen is one of your songwriting heroes. On this new record, you present “Dance Me To The End Of Love” from his 1984 album, VARIOUS POSITIONS. When were you first impacted by his work?
Tanya: Well, my dad has always loved him along with Tom Waits, and so I was raised with it. As soon as I hear his voice, I just want to hear every word. I don’t want to miss a word. In a crowd of many, he’s probably my favorite lyricist of all time. He’s just one of those artists that has always been in the foreground for me my entire life, from childhood on. I don’t forget about him. There’s never been a period in my life where I’ve said… hey, I haven’t listened to that in a while. He’s a constant for me. And, in particular, VARIOUS POSITIONS is my favorite. I love ‘em all, but that one is one that I just come back to so regularly.

Dave: Mary Margaret O’Hara may be the most obscure artist you draw from on this collection, yet “You Will Be Loved Again” may be the most potent performance on this record, with a lush mix of harmony vocals highlighting its delivery. The song also closes the album, which carries the same hallmark of O’Hara’s 1988 debut, MISS AMERICA, as well as Cowboy Junkies’ 1990 album, THE CAUTION HORSES. It’s powerful and coincidentally has the timeless feel of a Cohen-esque standard. What led you to select this song to wrap up the record?
Tanya: Well, as you’re saying… it’s a closer, and that’s it. It has to be the last thing. When Throwing Muses were on tour in England, Ivo Watts-Russell gave that (MISS AMERICA) to us to listen to in the van and we were just floored. I mean… silent throughout the whole listening of it. And to this day, I think for all of us, it’s probably up there on our favorites. First of all… all props to her band because the instrumentation on that album is so cool. It’s just so interesting and spidery and I just love it. And, with her very odd but perfect rhythm weaving in and out of everything, and that clear, gorgeous, vast-ranged voice of hers… it’s just beauty.

Dave: Your multi-faceted career with Throwing Muses, The Breeders, Belly, as well as your busy solo work and guest collaborations have covered much ground over the years, but you’re far from done. In the post-pandemic world, following this release on American Laundromat Records, which creative outlet of yours might we see emerge next?
Tanya: I’m working on an album with Dylan In The Movies right now. And then Gail Greenwood, from Belly, and I have been writing some songs together. That’s been ongoing. We’ve got a few under our belts already. In quarantine we’ve been writing them and then sending them to Paul Kolderie. And he’s been sort of tweaking things. And then Belly… we were curating a festival in Providence that was supposed to happen in August with a bunch of bands. It was supposed to be us and Buffalo Tom and Madder Rose and Kate Hanley… a bunch of people. And now, that is going to be pushed back to 2021. So that will be probably the next big live project… and hopefully we can do it then.