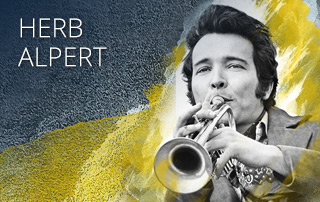 Let’s get the obvious out of the way – Herb Alpert is a national treasure. The legendary trumpeter and music mogul has not only created an enormously satisfying back catalog of his own – solo and with The Tijuana Brass – he also co-founded A&M Records, a label responsible for a plethora of hits since the early ‘60s. If you love The Carpenters, The Police, Rita Coolidge, Supertramp, Cat Stevens, Amy Grant, Quincy Jones, Janet Jackson, The Dickies, Bryan Adams, Cat Stevens, Joe Jackson, and Peter Frampton, you can thank Herb (and co-founder Jerry Moss) for taking those artists out of the wild and bringing them straight into your living room. However, Herb Alpert is much more than a successful musician and music industry mover and shaker. He is a painter and sculptor, as well as a philanthropist. Although not as prolific as he was in decades past, he still continues to record both as a solo artist and with his wife, vocalist Lani Hall. And over the years, rumors have circulated that Herb Alpert is one of the kindest and most personable music legends in the industry. And it all started with a trumpet and a trip to Tijuana, Mexico…

In the early ‘60s, while on a trip to Tijuana, Mexico, Herb Alpert was attending a bullfight and was inspired by the sound of a mariachi band and the crowd’s excited cheers. He decided to try to recreate that feeling in the studio and “The Lonely Bull” was born. With the release of that song in 1962, Alpert laid the foundation for his career for the next decade… and beyond. Naming his ‘band’ The Tijuana Brass, Herb and his bandmates – the studio version of the TJB consisted of members of The Wrecking Crew – created a unique sound that was often copied (The Brass Ring, anyone?) but never equaled. The 1965 album WHIPPED CREAM & OTHER DELIGHTS features one of the most iconic album covers in music history. After a dozen years of TJB glory (and millions in record sales around the world), Alpert retired the band name and continued as a solo artist. In 1979, he scored a #1 hit with “Rise”, a single taken from the album of the same name. And then…. Well, there’s just not enough space to talk about all of his accomplishments here. The only way to tell a more complete story would be a documentary and an accompanying soundtrack. And guess what? We’re in luck!

HERB ALPERT IS… is the title of the long-awaited documentary that covers the incredible career of Herb Alpert. An amazing look at an amazing career deserves an amazing soundtrack and the newly released HERB ALPERT IS… does not disappoint. The release – on three CDs or five 180gm vinyl LPs – comes in a lavish set that easily matches the majestic music contained within. The music begins with “The Lonely Bull” and features a very healthy amount of classic TJB tracks – including the #1 single “This Guy’s In Love With You” as well as other longtime favorites like “Tijuana Taxi” and “Spanish Flea” (AKA The Dating Game theme) – before heading off on a more varied solo career tackling everything from Smooth Jazz to Funk to Trip Hop… with some Reggae thrown in for good measure. While some of these recordings date back nearly 60 years, they are still fresh and invigorating. Alpert’s knack for recording songs with instantly hummable melodies is undeniable and a great hook stands the test of time. Herb Alpert is a man who turned an inspiration into a career that continues to inspire others. The proof is here for all to behold. Herb Alpert is… music. And music is… Herb Alpert.