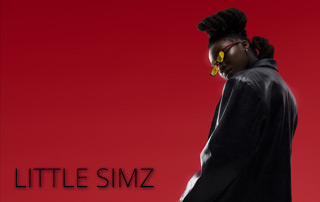 Born in London, England in February 1994, rapper, singer, and actress Simbiatu Abisola Abiola Ajikawo is better known by her stage name Little Simz. Born to Nigerian parents, Little Simz attended Highbury Fields School in London before attending St Mary’s Youth Club in Upper Street, Islington. After studying at Westminster Kingsway College, she chose to pursue a career in music. Her first steps towards her successful hip-hop career began in 2010 when she released her debut mixtape, STRATOSPHERE. That well-received release was followed by several more mixtapes including STRATOSPHERE 2 (2011), XY.ZED (2013), and BLANK CANVAS (2013). With interest in her music at high, she set up her own label, Age 101 Music, and released a series of EPs including E.D.G.E. (2014) plus DROP 1, DROP 2, and DROP 3, all released in 2014. The following year began with the release with of a few more EPs but ended with a bang…

In September 2015, Little Simz released her debut album A CURIOUS TALE OF TRIALS + PERSONS, which entered the UK’s R&B Albums chart at #20. The album’s popularity stretched outside the R&B/Soul/Hip-Hop community and the album also entered the Independent Albums chart at #43. Little Simz followed that album in late 2016 with STILLNESS IN WONDERLAND, another critical success. However, her third album, GREY AREA (2019), was her commercial breakthrough. Winning the Best Album honors at both the Ivor Novello and NME Awards, the album was also nominated for a Mercury Prize. Many fellow musicians – including Jay-Z, Damon Albarn, and Kendrick Lamar – began to sing her praises, raising her commercial profile even higher. Singles such as “Offence”, “Boss”, and “Selfish” (featuring Cleo Sol) introduced Little Simz to a new audience while also exciting her existing fanbase.

Now, 18 months after the release of GREY AREA. Little Simz returns with SOMETIMES I MIGHT BE INTROVERT. Including the singles “Introvert”, “Woman” (featuring Cleo Sol), “Rollin’ Stone”, “I Love You, I Hate You”, and “Point and Kill” (featuring Obongjayar), the album blends modern hip-hop and electronica with a pure understanding of soul and R&B music. While her raps are riveting, the power of Little Simz’s musical arrangements lie within the soaring and melodic sung choruses and the swirling keyboards. The hip-hop beats may help Little Simz tell her stories, but the huge walls of melodies pick the listener up and gently cradles them, unveiling the depths of the music while also providing comfort and calm. In many ways, the verses – and her lyrics – spell out the uncertainty of the times but those massive hooks come in and provide hope and reassurance. Which makes SOMETIMES I MIGHT BE INTROVERT an album that a lot of people should be able to connect with. And judging by critics and social media, this is an album that is definitely doing just that.