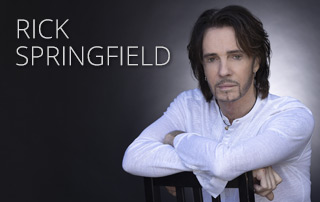 If you only remember Rick Springfield for the hit single “Jessie’s Girl” and his stint as Dr. Noah Drake on General Hospital in the early ‘80s, you really don’t know Rick Springfield. Born in Australia, he joined rock quartet Zoot – which also featured future Little River Band member Beebs Birtles – in 1969. When the band split, Rick Springfield pursued a solo career, releasing his debut single, “Speak to the Sky”, in October of 1971. The song became a sizable hit in many countries. After recording is debut album, BEGINNINGS, in England, Springfield moved to the US in 1972. Several months later, “Speak to the Sky” became a US hit and for the next 10 years, he released several albums hoping to capture his early solo success. While he maintained a moderate level of success, several attempts to raise his commercial profile failed. However, Rick Springfield refused to give up.

While he had guest starred on many different TV shows – The Six Million Dollar Man, Wonder Woman, The Rockford Files, The Incredible Hulk, etc. – his breakthrough acting role came in 1981 when he starred as Dr. Noah Drake on the popular daytime soap opera General Hospital. At this point, he had already recorded his WORKING CLASS DOG album but was not expecting the album to be any more successful than his previous albums. Thankfully, he was wrong. Because of his high-profile gig on General Hospital and the glorious Pop sounds of WORKING CLASS DOG, the album was an enormous success, as were the singles ‘Jessie’s Girl” and “I’ve Done Everything for You”. Although it took over a decade, Rick Springfield became an overnight success. Other hit albums followed including SUCCESS HASN’T SPOILED ME YET (1982), LIVING IN OZ (1983), HARD TO HOLD (soundtrack to his 1984 movie), TAO (1985), and ROCK OF LIFE (1988). After nearly eight years of massive  commercial success, he took a decade long break and then returned to performing and recording with the album KARMA in 1999. He’s continued to release albums, tour, and appear on numerous TV shows since his return to performing 23 years ago.

With the release of 2022’S WORKING CLASS DOG: 40TH ANNIVERSARY SPECIAL LIVE EDITION (CD + DVD), Rick Springfield celebrates his career-defining album by revisiting every track on the album in a studio live setting. During the COVID-19 pandemic lockdown, he gathered his bandmates together at his Malibu, California home and performed the album from start to finish as the tapes rolled. The resulting recordings retain the charm of the originals while also adding a reflective layer that could only come from a man looking back at his past. The aforementioned “Jessie’s Girl” and “I’ve Done Everything for You” are present and accounted for, but so are other gems including the Power Pop classic “Love is Alright Tonite” and other fan favorites such as “Carry Me Away”, “The Light of Love”, and “Hole in My Heart”. Listening to the band charging through these classic Rick Springfield tracks is like hanging out with one of your favorite high school friends 40 years later and remembering all the great things about him/her while also accepting the wonderful person they’ve become. Great music never gets old. WORKING CLASS DOG: 40TH ANNIVERSARY SPECIAL LIVE EDITION also includes a bonus DVD that features behind the scenes footage, the full album performed live, plus four extra Rick Springfield hits: “Love Somebody”, “Don’t Talk to Strangers”, “State of the Heart”, and “Affair of the Heart”.