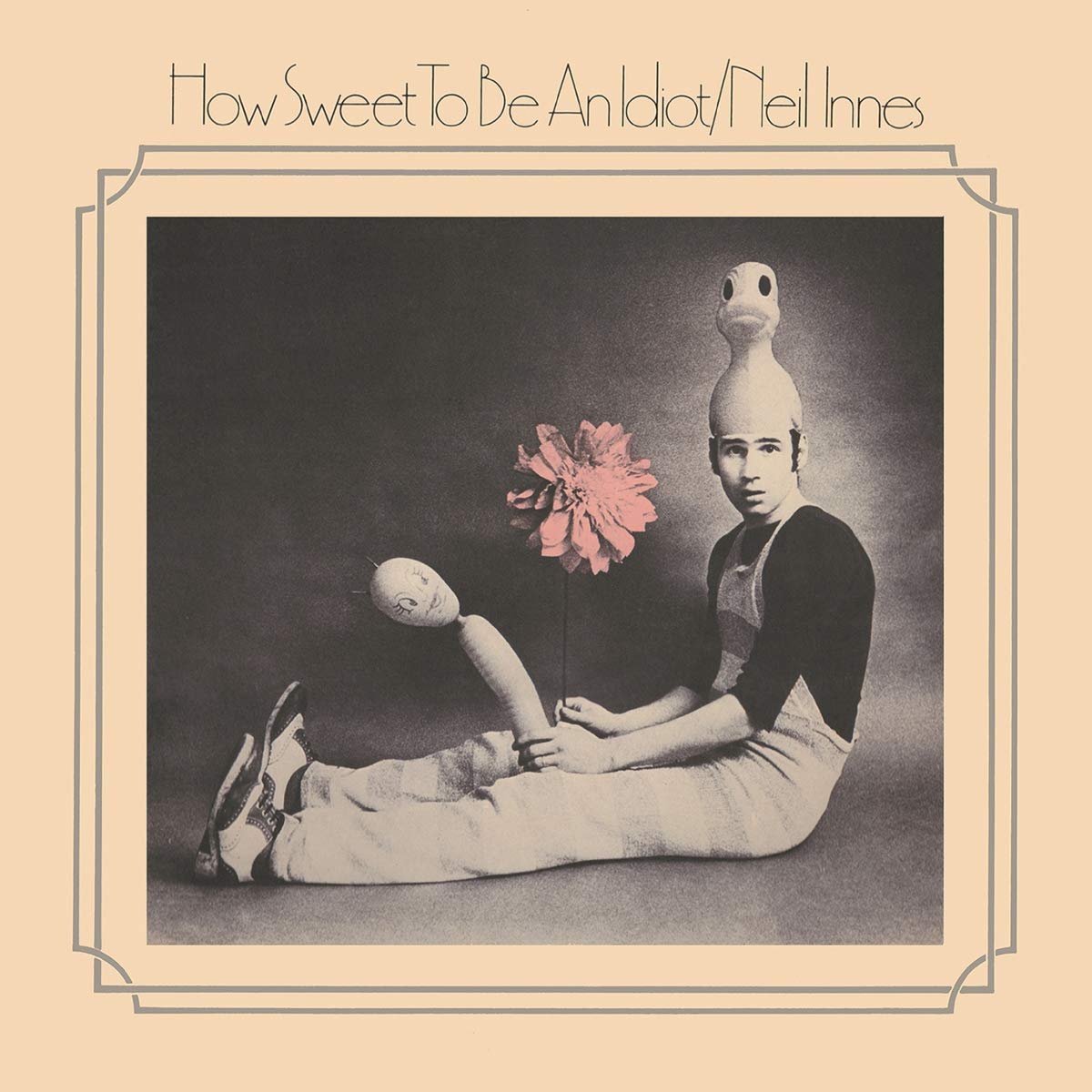 Neil Innes was best-known for his work with the Bonzo Dog Doo-Dah Band, The Rutles, and his association with Monty Python. However, it almost seems unfair that a gentleman so musically gifted is remembered for his humor more than his fantastic and wildly eclectic back catalog of great songs. From his ‘60s recordings with the Bonzos to his final album released just prior to his death in December, 2019, Neil Innes was an exceptional songwriter, taking his influences, blending them together and creating many instant classics. He may not have been prolific, but he sure made each release matter.

HOW SWEET TO BE AN IDIOT was his official solo debut album after five albums with the Bonzos (1966-1972), one with The World (1970) and two with Grimms (1973). While his overall history of bing involved with humorous projects and the title and album cover of HOW SWEET TO BE AN IDIOT may lead you to believe that this is a comedy album, that isn’t entirely true. The album is funny, fun, eccentric, and eclectic but it shouldn’t be filed under ‘comedy’ in your local shops. This is a Pop album, through and through.

If you loved Innes’ work with the Rutles, there are certainly plenty of musical nods to The Beatles here, although they are far more subtle than anything by the Rutland lads. “Dream (On)” could be a Ron Nasty solo release, followed by “L’Amour Perdu”, which could be a Rutles-era Dirk McQuickly vaudeville-influenced nuggets. Then again, “Momma B” could easily have been a Rutles rocker…

There’s more to HOW SWEET TO BE AN IDIOT than Rutles references. “Song For Yvonne” is the perfect vehicle for his eclectic creativity and his gift or melody. “Immortal Invisible” has a wonderful Gospel groove. “Topless-A-Go-Go” could have been recorded in the middle of a New Orleans bender. “Feel No Shame” is a good-time rocker with a shot of Rhythm & Blues – and boy does that instrumental riff sound familiar! The album’s closers are the most serious cuts on the album – “This Love of Ours” and “Singing A Song Is Easy”. The former is a heartfelt, moody mid-tempo ballad with a slight reggae stomp, while the latter is a melodic, uplifting sing-along with a hint of Gospel and a touch of melancholia. If all you’ve heard is his more humorous material, you’ll be surprised at how emotional Innes can be on these last two tracks.

And about the title track, “How Sweet To Be An Idiot”… this reviewer used to own a vinyl copy of the album that featured the ‘piano and vocal’ version of the song, so hearing the ORIGINAL album version with full band and string quartet was a surprise and a real treat. The two different arrangements may be radically different, but the feel – the ‘vibe’, if you will – is still very similar.

BUT WAIT! THAT’S NOT ALL!

This expanded reissue features 10 bonus tracks including the ‘piano and vocal’ version of “How Sweet To Be An idiot”, and some great non-album material including the miraculous “Recycled Vinyl Blues” (you have to hear it to believe it!) and so much more.

HOW SWEET TO BE AN IDIOT is proof that Neil Innes should be considered, first and foremost, a musician and songwriter before you even add in humorist, comedian, or whatever silly names you want to throw at him. Don’t think of him as a former Rutle, Bonzo, or Python – just think of him as Neil Innes. You’ll rest easier at night, trust me.