Bernard Allison made his recording debut on GONNA BE A LIVE ONE IN HERE TONIGHT, a 1979 live album by his father Luther Allison. Recorded live in Peoria, IL when Bernard was only 13, this set was an auspicious debut for an artist that has continued to mine the soul of the Blues for over forty years. In the early ‘80s, the young guitar slinger became a member of Koko Taylor’s band as well as continuing to work with is father. While it took another 11 years before he released his first official solo album (1990’s THE NEXT GENERATION), Bernard has certainly made each release count. He may have inherited his father’s talents but Bernard has taken the Blues in new and exciting directions.

Three decades on from that debut solo release, Bernard is releasing the highly-anticipated LET IT GO album. Now based in Paris, France, the Chicago-born Bluesman came back to the U.S. to record his latest platter. “LET IT GO was recorded at Bessie Blue Studio, Stantonville, Tennessee, with legendary music producer Jim Gaines,” recalls Bernard. “We made the decision to not flood the CD with keyboards or horns, to go back to the true basic rhythm section sound – and to show more mature songwriting.”
Even though he’s been playing guitar since the age of 10, Bernard Allison continues to explore new ways of expressing himself. LET IT GO is a logical step forward from his 2015 album IN THE MIX yet it doesn’t stray away from the classic Blues sound he’s best known for. Mature yet still fresh and exciting, LET IT GO is a stellar release from one of the Blues’ most emotional guitarists and vocalists. With Mike Zito and Vanja Sky on board for these recordings, the band is tight and focused. “We all just came together as a group to create this album,” Bernard considers, “to show our chemistry as friends and bandmates. My favorite memory was watching the faces of everyone involved in the session. Everyone came to lay it on down and gave 110%…” And that is really what it is all about. 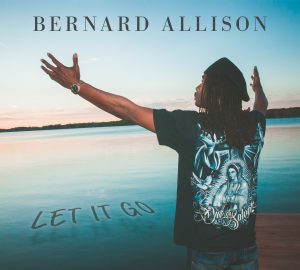