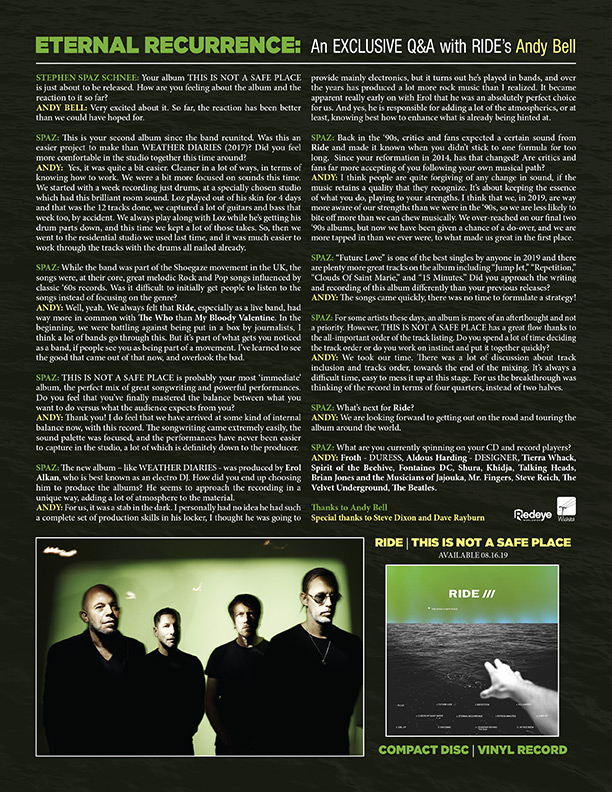 STEPHEN SPAZ SCHNEE: Your album THIS IS NOT A SAFE PLACE is just about to be released. How are you feeling about the album and the reaction to it so far?
ANDY BELL: Very excited about it. So far, the reaction has been better than we could have hoped for.


SPAZ: This is your second album since the band reunited. Was this an easier project to make than WEATHER DIARIES (2017)? Did you feel more comfortable in the studio together this time around?
ANDY:  Yes, it was quite a bit easier. Cleaner in a lot of ways, in terms of knowing how to work. We were a bit more focused on sounds this time. We started with a week recording just drums, at a specially chosen studio which had this brilliant room sound. Loz played out of his skin for 4 days and that was the 12 tracks done, we captured a lot of guitars and bass that week too, by accident. We always play along with Loz while he’s getting his drum parts down, and this time we kept a lot of those takes. So, then we went to the residential studio we used last time, and it was much easier to work through the tracks with the drums all nailed already.

SPAZ: While the band was part of the Shoegaze movement in the UK, the songs were, at their core, great melodic Rock and Pop songs influenced by classic ‘60s records. Was it difficult to initially get people to listen to the songs instead of focusing on the genre?
ANDY: Well, yeah. We always felt that Ride, especially as a live band, had way more in common with The Who than My Bloody Valentine. In the beginning, we were battling against being put in a box by journalists, I think a lot of bands go through this. But it’s part of what gets you noticed as a band, if people see you as being part of a movement. I’ve learned to see the good that came out of that now, and overlook the bad. 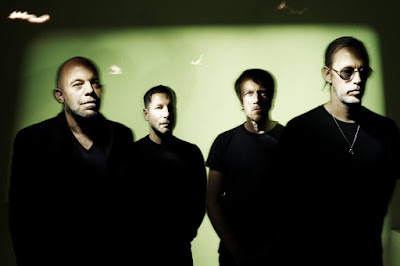 SPAZ: THIS IS NOT A SAFE PLACE is probably your most ‘immediate’ album, the perfect mix of great songwriting and powerful performances. Do you feel that you’ve finally mastered the balance between what you want to do versus what the audience expects from you?
ANDY: Thank you! I do feel that we have arrived at some kind of internal balance now, with this record. The songwriting came extremely easily, the sound palette was focused and the performances have never been easier to capture in the studio, a lot of which is definitely down to the producer.

SPAZ: The new album – like WEATHER DIARIES – was produced by Erol Alkan, who is best known as an electro DJ. How did you end up choosing him to produce the albums? He seems to approach the recording in a unique way, adding a lot of atmosphere to the material.
ANDY: For us, it was a stab in the dark. I personally had no idea he had such a complete set of production skills in his locker, I thought he was going to provide mainly electronics, but it turns out he’s played in bands, and over the years has produced a lot more rock music than I realized. It became apparent really early on with Erol that he was an absolutely perfect choice for us. And yes, he is responsible for adding a lot of the atmospherics, or at least, knowing best how to enhance what is already being hinted at.

SPAZ: Back in the ‘90s, critics and fans expected a certain sound from Ride and made it known when you didn’t stick to one formula for too long.  Since your reformation in 2014, has that changed? Are critics and fans far more accepting of you following your own musical path?
ANDY: I think people are quite forgiving of any change in sound, if the music retains a quality that they recognize. It’s about keeping the essence of what you do, playing to your strengths. I think that we, in 2019, are way more aware of our strengths than we were in the ‘90s, so we are less likely to bite off more than we can chew musically. We over-reached on our final two ‘90s albums, but now we have been given a chance of a do-over, and we are more tapped in than we ever were, to what made us great in the first place.

SPAZ: “Future Love” is one of the best singles by anyone in 2019 and there are plenty more great tracks on the album including “Jump Jet,” “Repetition,” “Clouds Of Saint Marie,” and “15 Minutes.” Did you approach the writing and recording of this album differently than your previous releases?
ANDY: The songs came quickly, there was no time to formulate a strategy !

SPAZ: For some artists these days, an album is more of an afterthought and not a priority. However, THIS IS NOT A SAFE PLACE has a great flow thanks to the all-important order of the track listing. Do you spend a lot of time deciding the track order or do you work on instinct and put it together quickly?
ANDY: We took our time. There was a lot of discussion about track inclusion and tracks order, towards the end of the mixing. It’s always a difficult time, easy to mess it up at this stage. For us the breakthrough was thinking of the record in terms of four quarters, instead of two halves.

SPAZ: What’s next for Ride?
ANDY: We are looking forward to getting out on the road and touring the album around the world. 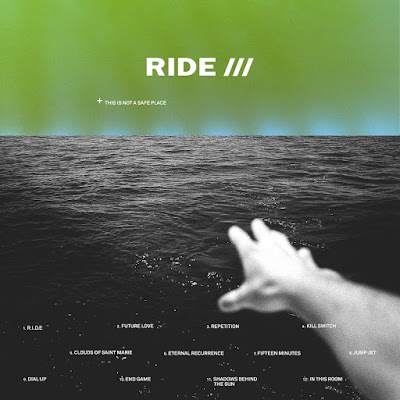 RIDE
THIS IS NOT A SAFE PLACE
(Wichita Records)