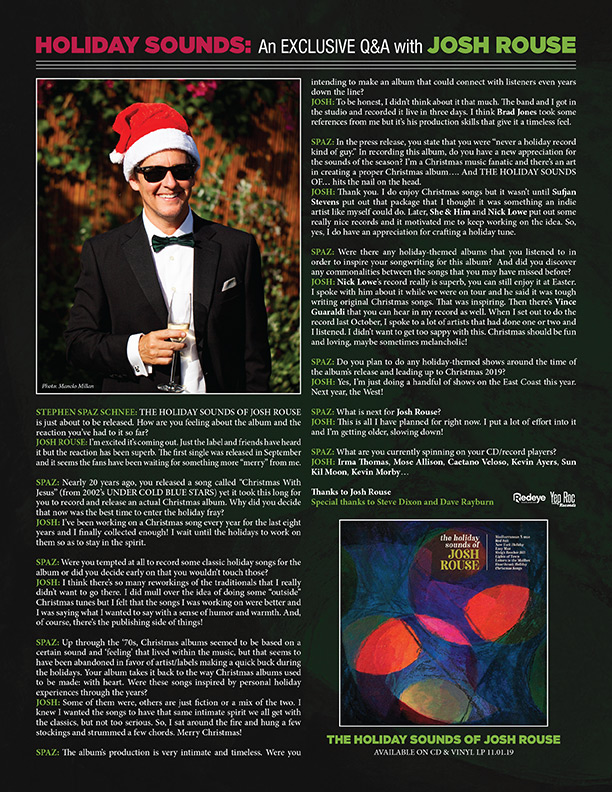 STEPHEN SPAZ SCHNEE: THE HOLIDAY SOUNDS OF JOSH ROUSE is just about to be released. How are you feeling about the album and the reaction you’ve had to it so far?
JOSH ROUSE: I’m excited it’s coming out. Just the label and friends have heard it but the reaction has been superb. The first single was released in September and it seems the fans have been waiting for something more “merry” from me.


SPAZ: Nearly 20 years ago, you released a song called “Christmas With Jesus” (from 2002’s UNDER COLD BLUE STARS) yet it took this long for you to record and release an actual Christmas album. Why did you decide that now was the best time to enter the holiday fray?
JOSH: I’ve been working on a Christmas song every year for the last eight years and I finally collected enough! I wait until the holidays to work on them so as to stay in the spirit.

SPAZ: Were you tempted at all to record some classic holiday songs for the album or did you decide early on that you wouldn’t touch those?
JOSH: I think there’s so many reworkings of the traditionals that I really didn’t want to go there. I did mull over the idea of doing some “outside” Christmas tunes but I felt that the songs I was working on were better and I was saying what I wanted to say with a sense of humor and warmth. And, of course, there’s the publishing side of things!

SPAZ: Up through the ‘70s, Christmas albums seemed to be based on a certain sound and ‘feeling’ that lived within the music, but that seems to have been abandoned in favor of artist/labels making a quick buck during the holidays. Your album takes it back to the way Christmas albums used to be made: with heart. Were these songs inspired by personal holiday experiences through the years?
JOSH: Some of them were, others are just fiction or a mix of the two. I knew I wanted the songs to have that same intimate spirit we all get with the classics , but not too serious. So, I sat around the fire and hung a few stockings and strummed a few chords. Merry Christmas!

SPAZ: The album’s production is very intimate and timeless. Were you intending to make an album that could connect with listeners even years down the line?
JOSH: To be honest, I didn’t think about it that much. The band and I got in the studio and recorded it live in three days. I think Brad Jones took some references from me but it’s his production skills that give it a timeless feel. 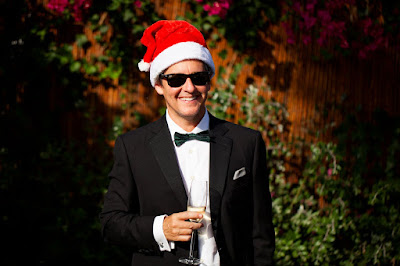 SPAZ:  In the press release, you state that you were “never a holiday record kind of guy.” In recording this album, do you have a new appreciation for the sounds of the season? I’m a Christmas music fanatic and there’s an art in creating a proper Christmas album…. And THE HOLIDAY SOUNDS OF… hits the nail on the head.
JOSH: Thank you. I do enjoy Christmas songs but it wasn’t until Sufjan Stevens put out that package that I thought it was something an indie artist like myself could do. Later, She & Him and Nick Lowe put out some really nice records and it motivated me to keep working on the idea. So, yes, I do have an appreciation for crafting a holiday tune.
SPAZ: Were there any holiday-themed albums that you listened to in order to inspire your songwriting for this album?  And did you discover any commonalities between the songs that you may have missed before?
JOSH: Nick Lowe’s record really is superb, you can still enjoy it at Easter. I spoke with him about it while we were on tour and he said it was tough writing original Christmas songs. That was inspiring.  Then there’s Vince Guaraldi that you can hear in my record as well. When I set out to do the record last October, I spoke to a lot of artists that had done one or two and I listened. I didn’t want to get too sappy with this. Christmas should be fun and loving, maybe sometimes melancholic!

SPAZ: Do you plan to do any holiday-themed shows around the time of the album’s release and leading up to Christmas 2019?
JOSH: Yes, I’m just doing a handful of shows on the East Coast this year. Next year, the West!

SPAZ: What is next for Josh Rouse?
JOSH: This is all I have planned for right now. I put a lot of effort into it and I’m getting older, slowing down! 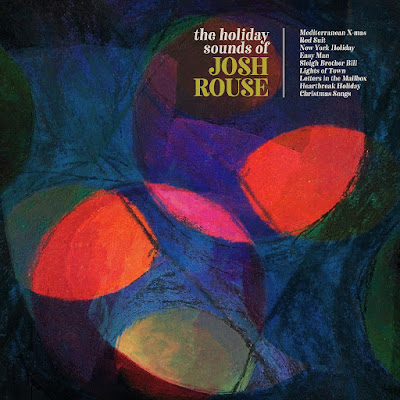 
THE HOLIDAY SOUNDS OF…