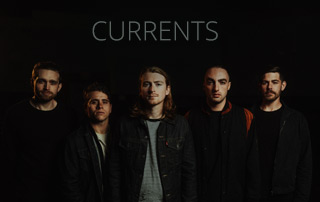 Metalcore is a genre that combines elements of Extreme Metal and Hardcore Punk. When listening to Metalcore, you’re likely to experience the pummeling audio experience of violent Metal yet the lyrics tend to be based in the real world of politics, personal tragedies, and other more emotionally dark topics. More often than not, the lyrics tend to be dark and shrouded in mystery and shadows. Some of the better-known Metalcore bands include Underoath, Silverstein, Shadows Fall, Of Mice And Men, and the oddly-named Tony Danza Tapdance Extravaganza. However, like any other genre, there are bands that may use Metalcore as a jumping off point, but they take it in new directions. Currents is one of those bands…

Currents was formed in Fairfield, Connecticut in 2011. Their first two releases – the VICTIMIZED EP (2013) and LIFE – LOST (2015) – were issued independently. The moody Metal quintet then signed with Sharptone Records and released THE PLACE I FEEL SAFEST in 2017. The album was followed by the I LET THE DEVIL IN EP in 2018. As the band’s sound matured, they began adding many elements into their sound. From Metalcore to Progressive Metal with a hint of Screamo, Currents charted their own musical course and set their phasers to stun! The band has had a few line-up changes but their ‘current’ configuration is their strongest yet: Brian Wille (vocals), Chris Wiseman (guitar), Ryan Castaldi (guitar). Matt Young (drums), and Christian Pulgarin (bass). And this line-up presents the band’s heaviest and strongest album to date, THE WAY IT ENDS.

THE WAY IT ENDS is a dark, angry album, but it is not completely without hope. Although written before the onset of a worldwide pandemic and the protests in the wake of George Floyd’s murder, the album now reflects the dark, cold, and tortured feelings that many people are experiencing at this time. The album is multi-layered, filled with emotional trauma that may shock the listener… but also help them realize that they are most certainly not alone in their own fears. This is an album that is focused on inner torment brought on by an unforgiving world. THE WAY IT ENDS is said to be ‘a thematic and spiritualsuccessor to their dense, bludgeoning, and smartly constructed full-length debut, THE PLACE I FEEL SAFEST, and a direct follow-up to the blistering and diverse EP, I LET THE DEVIL IN.’ While that may be the case, it certainly stands on its own as a massive punch to the gut in the best possible way. THE WAY IT ENDS may prove to be a prophetic title, or it could just end up being the best Currents album yet. Only time will tell.

THE WAY IT ENDS