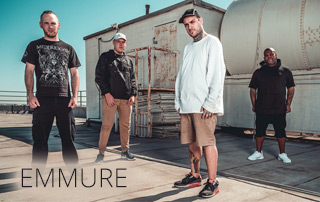 Like any other musical genre, Heavy Metal can be broken down into many sub-genres. Many, many sub-genres. On one end, you’ve got commercially-accepted Heavy Metal, which is normally what you’ll find hanging out on the Billboard 200 Albums chart. Nothing wrong with that – often-times, bands like Iron Maiden and Judas Priest serve as ‘gateway’ artists, introducing listeners to a new musical universe to explore. On the other end of the spectrum, you’ve got the darker, heavier, and more violent sub-genres like Extreme Metal, Metalcore, and Deathcore. Technically, Deathcore is a combination of Death Metal and Metalcore, which, itself, is a mixture of Extreme Metal and Hardcore Punk. See what I mean about all the sub-genres? In any case, Metalcore and Deathcore are brutal and uncompromising sub-genres of music, which brings us to the band Emmure…

Emmure was formed in 2003 in New Fairfield, Connecticut but eventually relocated to Queens, New York. Fronted by vocalist Frankie Palmeri – the only constant member of the band – Emmure’s music combines elements of Death Core, Nu Metal, Alternative Metal, and Metalcore. Their debut release was the independent 2006 EP THE COMPLETE GUIDE TO NEEDLEWORK. They then signed to Victory Records and released six albums including GOODBYE TO THE GALLOWS (2007), SPEAKER OF THE DEAD (2011), and ETERNAL ENEMIES (2014). Moving over to Sharptone Records, Emmure released LOOK AT YOURSELF in 2017. After a three-year wait, the band release their eighth studio album, HINDSIGHT. If you thought that Emmure would grow more mellow with age, then this album will prove that you were wrong. Very, very wrong.

HINDSIGHT is 2020. OK, maybe not literally but most certainly figuratively. The album reflects the mood of the nation – and even the world – today. Dark. Violent. Brutal. Scary. Uncompromising. Heavy. Confusing. Shocking. Both musically and lyrically, the album embraces the darkest parts of the human condition and sonically vomits it up into 13 separate slices of reality. HINDSIGHT features the key tracks “Pigs Ear” and “Gypsy Disco”, but the remaining 11 tracks are just as frighteningly brutal and honest.  Filled with the band’s trademark breakdowns, growls, screams, and straightforward lyrics, HINDSIGHT is the audio equivalent of the fear that we experience every day during this pandemic. The album is so in-your-face that you may even have to wear a face mask to protect yourself from the cold, hard truths contained within. HINDSIGHT is our reality. Deal with it.