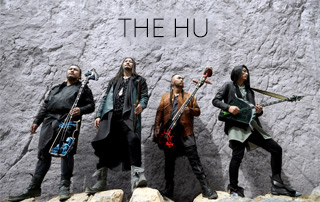 Mongolia, located in East Asia, is a country that is not necessarily known around the world for its rich Rock music heritage. The country is better known for the lovely and more traditional music that has attracted World Music lovers for years. Influenced by nature, nomadism, shamanism and Tibetan Buddhism, the traditional sound of Mongolian music is inspirational and soothing. However, there has been a movement within Mongolia that has been growing for decades. The Beatles-influenced band Soyol Erdene, formed in 1971, was the country’s first Rock band. The Rock movement continued to grow, heading into many directions including the heavy and hard sounds of bands like Mungunhurhree and Haranga. While largely unnoticed by the rest of the world, Mongolia’s Rock music scene continued to thrive, giving birth to new generations of bands… including The Hu.

While they are referred to as a ‘Heavy Metal’ band, The Hu – formed in 2016 – is a band that exists in their own musical universe. Formed by Galbadrakh ‘Gala’ Tsendbaatar, Nyamjantsan ‘Jaya’ Galsanjamts, Enkhsaikhan ‘Enkush’ Batjargal and Temuulen ‘Temka’ Naranbaatar, The Hu may play a form of music that is heavier than Mongolia’s more traditional Folk but labeling them as a Metal band is not entirely accurate. Creating  dark and heavy sounds with Mongolian instruments like the Morin khuur,  and Tovshuur and then incorporating Mongolian throat singing, The Hu has labeled their music as ‘Hunnu Rock’, a name inspired by the ancient empire Hunnu (AKA The Huns). The band’s unique sound has garnered praise from VICE, GQ, The Independent, and even Pop/Rock legend Elton John.

The Hu released their debut album, THE GEREG, in September 2019. Receiving critical praise across the board, audiences all over the world fell in love with the band’s unique approach to heavy Rock. The album reached #11 on the Australian Albums chart, #7 on the Scottish Albums chart, #21 on the UK Albums chart, and achieved similar successes in other countries. Now, the band releases a Deluxe Edition of THE GEREG that not only features the original album in all of its glory, it also includes six bonus tracks: acoustic versions of three of the album’s tracks plus new versions of three songs featuring modern Hard Rock luminaries Papa Roach, From Ashes To New, and Halestorm’s Lzzy Hale. The fusing of old-world traditions and new Rock rhythms is inspiring, and The Hu is proudly representing Mongolia in a way that audiences would have never expected. The gates are open – welcome to the world of The Hu!