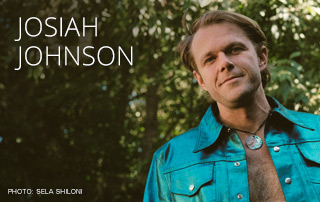 Josiah Johnson may be a new name to some music lovers, but he’s nearly an industry veteran, having been a professional musician for more than a decade. And these days, that can almost seem like a lifetime for today’s popstar. He began his career in the Indie Folk band The Head and the Heart, who formed in 2009. The band’s self-titled debut album was released in 2011 and went on to be certified Gold by the RIAA. Their second album, LET’S BE STILL, was released in 2013 and reached #10 on the Billboard Hot 100. The band’s career was on the rise, but getting stuck on the ‘write/record/tour’ treadmill was more stressful than expected and Johnson turned to substances, which inevitably led to rehab and his subsequent ‘leave of absence’ from the band. The Head and the Heart continued without Josiah, although some of his work appeared on their third album, SIGNS OF LIGHT (2016). The band’s most recent album, LIVING MIRAGE, was released in 2019.

Since his hiatus from The Head and the Heart began, Johnson hasn’t been idle. He has continued to write songs, recorded home demos, and sought out a producer. Even while he was preparing the next step in his musical career, he even contemplated leaving the music industry and pursuing a career in social work. However, the power of music kept him rooted and focused as he composed even more new material for his next project… if there was going to be a next project. Johnson performed at a private show in New York City and connected with a group of musicians including Peter Lalish (Lucius). Inspired by this new group of musical friends, Johnson headed into the studio to record his first solo album. Armed with a batch of new songs – his most personal and honest material yet – Josiah Johnson returns with EVERY FEELING ON A LOOP (Anti-), an album that will remind fans, old and new, just how special his talents are.

EVERY FEELING ON A LOOP is an album that sounds like a continuation AND a reboot of what Johnson had been doing with The Head and the Heart. While the album is mature and confident, there’s also a hint of uncertainty and loss lurking beneath the gentle songwriting and quirky arrangements. The Folk and Pop genres in 2020 are very different than they were in the ‘60s, yet EVERY FEELING ON A LOOP is a wispy stroll on the bridge that connects the two disparate decades together. While certainly rooted in modern times, the songwriting on the album is simple and engaging on the surface, but peel away the layers and you’re going to discover many musical parts working together to create the sounds you eventually hear. Add in the proper amount of emotion, and you’ve got an album that not only sounds great but ‘feels’ right. Highlights include “Woman in a Man’s Life”, “Same Old Brick”, “I Wish I Had”, and “World’s Not Gonna End”. The magic of music is that it makes you FEEL something. That’s why you’ll keep coming back to EVERYTHING ON A LOOP again and again.

EVERY FEELING ON A LOOP