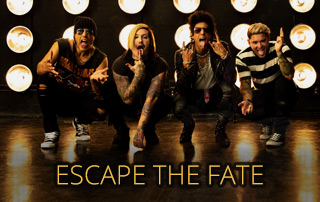 Founded in Las Vegas, Nevada in 2004, Escape the Fate is a Metalcore band that has survived an ever-changing musical landscape and remain top of their game nearly 20 years since their formation. Initially featuring Ronnie Radke (vocals), Bryan Monte Money (guitar), Max Green (bass), and Robert Ortiz (drums), the band eventually added Carson Allen (keyboards) and Omar Espinoza (guitarist). The band began touring and recorded a demo, eventually landing a contract with Epitaph Records. By the time they released their debut album, DYING IS YOUR LATEST FASHION (2006), Allen and Espinoza had left the band and Radke followed suite after the album was released. While the band had achieved some success with their debut album, losing their front man cast a dark shadow over their future. But things were about to change. Enter former Blessthefall vocalist Craig Mabbitt and Escape the Fate’s future began to look brighter.

The band released THIS WAR IS OURS in 2008 and it reached #35 on Billboard’s 200 Albums chart. In 2010, their self-titled third album hit #1 on Billboard’s Hard Rock Albums chart, #25 on the Billboard 20, and #4 on the Rock Albums chart. By the time their next album, UNGRATEFUL, was released in 2013, Max Green was out of the band and TJ Bell stepped in on bass. The band then added a second guitarist, Michael Money (brother of Monte). Two years later, the album HATE ME featured another line-up change: the Money brothers were gone, replaced by guitarist Kevin ‘Thrasher’ Gruff. TJ Bell moved over to rhythm guitar and he and Gruff handled bass duties in the studio. Escape the Fate then released their next album, I AM HUMAN, in 2018. With the release of the album, the band had maneuvered their way through the ever-changing Hard Rock landscape, always with their eyes on the future.

Escape the Fate’s 2021 album, CHEMICAL WARFARE, finds the band sounding fresh, energetic and unafraid to move backwards, forwards, and sideways at the same time. Behind the crunching guitar chords, you’re going to find electronic rhythms, some keyboards, and plenty of soaring melodies. More like an album of emotional anthems, CHEMICAL WARFARE is not a Pop album, but the melodic sing-along hooks are there. And guest performers are there, too – Lindsey Sterling appears on “Invincible” and Travis Barker is featured on “Not My Problem”. Most of the tracks on CHEMICAL WARFARE are fist-pumping, head-banging rockers, but Escape the Fate toss in a few curve balls including the danceable beats on “Unbreakable”, the haunting musical passages that appear from time to time (especially on “Erase You”) and subtle Hip-Hop influences spread throughout the album. The album’s title and cover reflect the paranoia that we experience today, but the music on the album offers an ‘escape’ (… ahem…) from grim realities we face when the music stops playing…