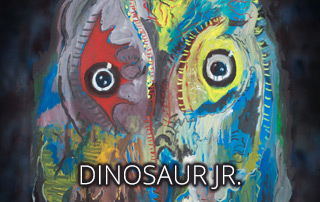 While other ground-breaking bands like Nirvana and Sonic Youth may have temporarily stolen the spotlight from them, Dinosaur Jr. have become one of the most important American Alternative Rock bands of all time. Originally formed in 1984, Dinosaur Jr. was comprised of J Mascis (guitar/vocals), Lou Barlow (bass/vocals), and Murph (drums). Initially known as Dinosaur, the trio released their self-titled debut album in 1985. Due to legal reasons – there was already a band called Dinosaur – the band changed their name to Dinosaur Jr. by the release of their second album YOU’RE LIVING ALL OVER ME, in 1987. The band were embraced by the critics and began to build a substantial fan base by the time of the release of 1988’s BUG. However, due to tensions in the band, bassist Barlow left just before they signed their major label deal with Sire Records. However, this was not the end of the classic Dinosaur Jr. line-up…

J Mascis and Murph continued under the Dinosaur Jr. name, releasing two more albums – GREEN MIND (1991) and WHERE YOU BEEN (1993) – before Murph exited the band, leaving Mascis as the sole original member. Mascis led Dinosaur Jr. for two more albums before laying the band name to rest after 1997’s HAND IT OVER. In the meantime, original bassist Lou Barlow refocused his attention on his side project Sebadoh and released a series of well-received albums. He also issued several solo albums and releases under various other names as well (Sentridoh, Lou Barlow and Friends, etc.). By the early 2000s, J Mascis began to attend Sebadoh shows and, in 2005, the original trio officially reunited. Two years later, they released BEYOND (2007), the first Dinosaur Jr. album in 10 years and the first to feature the original trio in two decades. The trio has continued to release albums since their reformation including FARM (2009), I BET ON SKY (2012), and GIVE A GLIMPS OF WHAT YER NOT (2016).

Five years after their last studio outing, J Mascis, Lou Barlow, and Murph return with 2021’s SWEEP IT INTO SPACE, an album that embraces and expands upon the band’s beloved musical legacy. Stradling the line between perfection and cacophony, Dinosaur Jr. is still filled with the shambolic charm and excitement that fueled their early albums and their more recent releases. While it is their 13th studio album overall, the band refers to it as the ‘fifth studio album since their rebirth’. Whichever way you want to look at it, this is classic Dinosaur Jr. served up with a side of modern kick-ass! J Mascis still sings with a wounded drawl, sounding both confident and confused but always in charge of his senses. Barlow provides two of the poppiest tracks on the album – “Garden” and “You Wonder” – but J Mascis is no slouch in the hooks department, providing many highlights including “I Ain’t”, “Hide Another Round”, “I Expect It Always”, and “To Be Waiting”. It’s always good to know that when the younger generation is more focused on creating TikTok videos, the old guard knows what we really want – real Rock ‘n’ Roll. Welcome back, Dinosaur Jr.

SWEEP IT INTO SPACE