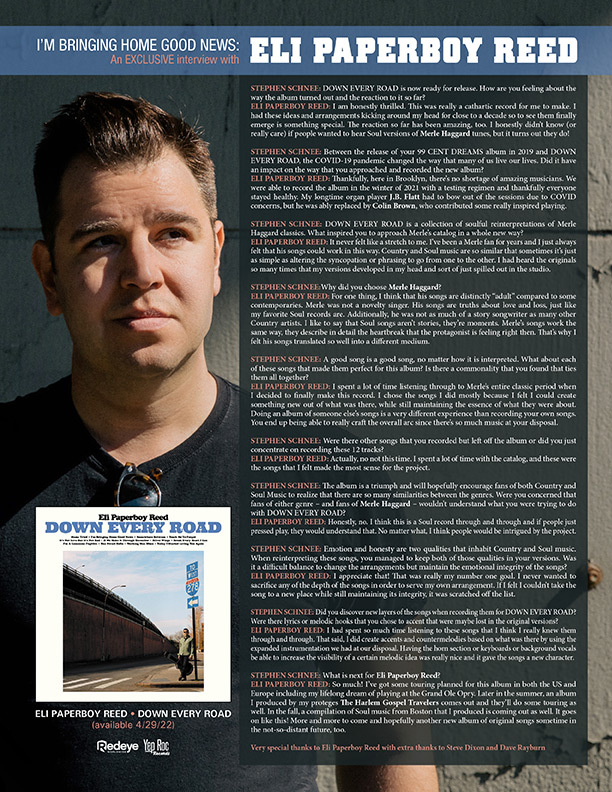 STEPHEN SCHNEE: DOWN EVERY ROAD is now ready for release. How are you feeling about the way the album turned out and the reaction to it so far?
ELI PAPERBOY REED: I am honestly thrilled. This was really a cathartic record for me to make. I had these ideas and arrangements kicking around my head for close to a decade so to see them finally emerge is something special. The reaction so far has been amazing, too. I honestly didn’t know (or really care) if people wanted to hear Soul versions of Merle Haggard tunes, but it turns out they do!

STEPHEN SCHNEE: Between the release of your 99 CENT DREAMS album in 2019 and DOWN EVERY ROAD, the COVID-19 pandemic changed the way that many of us live our lives. Did it have an impact on the way that you approached and recorded the new album?
ELI PAPERBOY REED: Thankfully, here in Brooklyn, there’s no shortage of amazing musicians. We were able to record the album in the winter of 2021 with a testing regimen and thankfully everyone stayed healthy. My longtime organ player J.B. Flatt had to bow out of the sessions due to Covid concerns, but he was ably replaced by Colin Brown, who contributed some really inspired playing.

STEPHEN SCHNEE: DOWN EVERY ROAD is a collection of soulful reinterpretations of Merle Haggard classics. What inspired you to approach Merle’s catalog in a whole new way?
ELI PAPERBOY REED: It never felt like a stretch to me. I’ve been a Merle fan for years and I just always felt that his songs could work in this way. Country and Soul music are so similar that sometimes it’s just as simple as altering the syncopation or phrasing to go from one to the other. I had heard the originals so many times that my versions developed in my head and sort of just spilled out in the studio.

STEPHEN SCHNEE: Why did you choose Merle Haggard?
ELI PAPERBOY REED: For one thing, I think that his songs are distinctly “adult” compared to some contemporaries. Merle was not a novelty singer. His songs are truths about love and loss, just like my favorite Soul records are. Additionally, he was not as much of a story songwriter as many other Country artists. I like to say that Soul songs aren’t stories, they’re moments. Merle’s songs work the same way, they describe in detail the heartbreak that the protagonist is feeling right then. That’s why I felt his songs translated so well into a different medium.

STEPHEN SCHNEE: A good song is a good song, no matter how it is interpreted. What about each of these songs that made them perfect for this album? Is there a commonality that you found that ties them all together?
ELI PAPERBOY REED: I spent a lot of time listening through to Merle’s entire classic period when I decided to finally make this record. I chose the songs I did mostly because I felt I could create something new out of what was there, while still maintaining the essence of what they were about. Doing an album of someone else’s songs is a very different experience than recording your own songs. You end up being able to really craft the overall arc since there’s so much music at your disposal.

STEPHEN SCHNEE: Were there other songs that you recorded but left off the album or did you just concentrate on recording these 12 tracks?
ELI PAPERBOY REED: Actually, no not this time. I spent a lot of time with the catalog, and these were the songs that I felt made the most sense for the project.

STEPHEN SCHNEE: The album is a triumph and will hopefully encourage fans of both Country and Soul Music to realize that there are so many similarities between the genres. Were you concerned that fans of either genre – and fans of Merle Haggard – wouldn’t understand what you were trying to do with DOWN EVERY ROAD?
ELI PAPERBOY REED: Honestly, no. I think this is a Soul record through and through and if people just pressed play, they would understand that. No matter what, I think people would be intrigued by the project.

STEPHEN SCHNEE: Emotion and honesty are two qualities that inhabit Country and Soul music. When reinterpreting these songs, you managed to keep both of those qualities in your versions. Was it a difficult balance to change the arrangements but maintain the emotional integrity of the songs?
ELI PAPERBOY REED: I appreciate that! That was really my number one goal. I never wanted to sacrifice any of the depth of the songs in order to serve my own arrangement. If I felt I couldn’t take the song to a new place while still maintaining its integrity, it was scratched off the list.

STEPHEN SCHNEE: Did you discover new layers of the songs when recording them for DOWN EVERY ROAD? Were there lyrics or melodic hooks that you chose to accent that were maybe lost in the original versions?
ELI PAPERBOY REED: I had spent so much time listening to these songs that I think I really knew them through and through. That said, I did create accents and countermelodies based on what was there by using the expanded instrumentation we had at our disposal. Having the horn section or keyboards or background vocals be able to increase the visibility of a certain melodic idea was really nice and it gave the songs a new character.

STEPHEN SCHNEE: What is next for Eli Paperboy Reed?
ELI PAPERBOY REED: So much! I’ve got some touring planned for this album in both the US and Europe including my lifelong dream of playing at the Grand Ole Opry. Later in the summer, an album I produced by my proteges The Harlem Gospel Travelers comes out and they’ll do some touring as well. In the fall, a compilation of Soul music from Boston that I produced is coming out as well. It goes on like this! More and more to come and hopefully another new album of original songs sometime in the not-so-distant future, too.