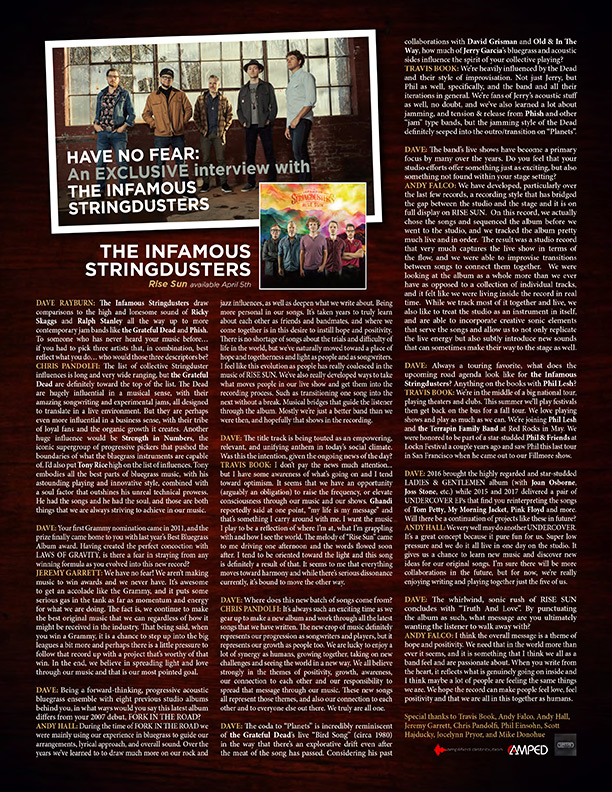 DAVE RAYBURN: The Infamous Stringdusters draw comparisons to the high and lonesome sound of Ricky Skaggs and Ralph Stanley all the way up to more contemporary jam bands like the Grateful Dead and Phish. To someone who has never heard your music before… if you had to pick three artists that, in combination, best reflect what you do… who would those three descriptors be?
CHRIS PANDOLFI: The list of collective Stringduster influences is long and very wide ranging, but the Grateful Dead are definitely toward the top of the list. The Dead are hugely influential in a musical sense, with their amazing songwriting and experimental jams, all designed to translate in a live environment. But they are perhaps even more influential in a business sense, with their tribe of loyal fans and the organic growth it creates. Another huge influence would be Strength in Numbers, the iconic supergroup of progressive pickers that pushed the boundaries of what the bluegrass instruments are capable of. I’d also put Tony Rice high on the list of influences. Tony embodies all the best parts of bluegrass music, with his astounding playing and innovative style, combined with a soul factor that outshines his unreal technical prowess. He had the songs and he had the soul, and those are both things that we are always striving to achieve in our music. 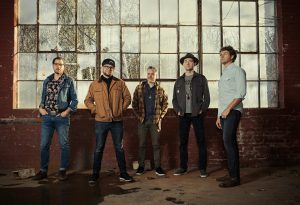 DAVE: Your first Grammy nomination came in 2011, and the prize finally came home to you with last year’s Best Bluegrass Album award. Having created the perfect concoction with LAWS OF GRAVITY, is there a fear in straying from any winning formula as you evolved into this new record?
JEREMY GARRETT: We have no fear! We aren’t making music to win awards and we never have. It’s awesome to get an accolade like the Grammy, and it puts some serious gas in the tank as far as momentum and energy for what we are doing. The fact is, we continue to make the best original music that we can regardless of how it might be received in the industry. That being said, when you win a Grammy, it is a chance to step up into the big leagues a bit more and perhaps there is a little pressure to follow that record up with a project that’s worthy of that win. In the end, we believe in spreading light and love through our music and that is our most pointed goal.

DAVE: Being a forward-thinking, progressive acoustic bluegrass ensemble with eight previous studio albums behind you, in what ways would you say this latest album differs from your 2007 debut, FORK IN THE ROAD?
ANDY HALL: During the time of FORK IN THE ROAD we were mainly using our experience in bluegrass to guide our arrangements, lyrical approach, and overall sound. Over the years we’ve learned to draw much more on our rock and jazz influences, as well as deepen what we write about. Being more personal in our songs. It’s taken years to truly learn about each other as friends and bandmates, and where we come together is in this desire to instill hope and positivity. There is no shortage of songs about the trials and difficulty of life in the world, but we’ve naturally moved toward a place of hope and togetherness and light as people and as songwriters. I feel like this evolution as people has really coalesced in the music of RISE SUN. We’ve also really developed ways to take what moves people in our live show and get them into the recording process. Such as transitioning one song into the next without a break. Musical bridges that guide the listener through the album. Mostly we’re just a better band than we were then, and hopefully that shows in the recording.

DAVE: The title track is being touted as an empowering, relevant, and unifying anthem in today’s social climate. Was this the intention, given the ongoing news of the day?
TRAVIS BOOK: I don’t pay the news much attention… but I have some awareness of what’s going on and I tend toward optimism. It seems that we have an opportunity (arguably an obligation) to raise the frequency, or elevate consciousness through our music and our shows. Ghandi reportedly said at one point, “my life is my message” and that’s something I carry around with me. I want the music I play to be a reflection of where I’m at, what I’m grappling with and how I see the world. The melody of “Rise Sun” came to me driving one afternoon and the words flowed soon after. I tend to be oriented toward the light and this song is definitely a result of that. It seems to me that everything moves toward harmony and while there’s serious dissonance currently, it’s bound to move the other way.

DAVE: Where does this new batch of songs come from?
CHRIS PANDOLFI: It’s always such an exciting time as we gear up to make a new album and work through all the latest songs that we have written. The new crop of music definitely represents our progression as songwriters and players, but it represents our growth as people too. We are lucky to enjoy a lot of synergy as humans, growing together, taking on new challenges and seeing the world in a new way. We all believe strongly in the themes of positivity, growth, awareness, our connection to each other and our responsibility to spread that message through our music. These new songs all represent those themes, and also our connection to each other and to everyone else out there. We truly are all one.

DAVE: The coda to “Planets” is incredibly reminiscent of the Grateful Dead’s live “Bird Song” (circa 1980) in the way that there’s an explorative drift even after the meat of the song has passed. Considering his past collaborations with David Grisman and Old & In The Way, how much of Jerry Garcia’s bluegrass and acoustic sides influence the spirit of your collective playing?
TRAVIS BOOK: We’re heavily influenced by the Dead and their style of improvisation. Not just Jerry, but Phil as well, specifically, and the band and all their iterations in general. We’re fans of Jerry’s acoustic stuff as well, no doubt, and we’ve also learned a lot about jamming, and tension & release from Phish and other “jam” type bands, but the jamming style of the Dead definitely seeped into the outro/transition on “Planets”.

DAVE: The band’s live shows have become a primary focus by many over the years. Do you feel that your studio efforts offer something just as exciting, but also something not found within your stage setting?
ANDY FALCO: We have developed, particularly over the last few records, a recording style that has bridged the gap between the studio and the stage and it is on full display on RISE SUN. On this record, we actually chose the songs and sequenced the album before we went to the studio, and we tracked the album pretty much live and in order. The result was a studio record that very much captures the live show in terms of the flow, and we were able to improvise transitions between songs to connect them together. We were looking at the album as a whole more than we ever have as opposed to a collection of individual tracks, and it felt like we were living inside the record in real time. While we track most of it together and live, we also like to treat the studio as an instrument in itself, and are able to incorporate creative sonic elements that serve the songs and allow us to not only replicate the live energy but also subtly introduce new sounds that can sometimes make their way to the stage as well.

DAVE: Always a touring favorite, what does the upcoming road agenda look like for the Infamous Stringdusters? Anything on the books with Phil Lesh?
TRAVIS BOOK: We’re in the middle of a big national tour, playing theaters and clubs. This summer we’ll play festivals then get back on the bus for a fall tour. We love playing shows and play as much as we can. We’re joining Phil Lesh and the Terrapin Family Band at Red Rocks in May. We were honored to be part of a star-studded Phil & Friends at Lockn Festival a couple years ago and saw Phil this last tour in San Francisco when he came out to our Fillmore show.

DAVE: 2016 brought the highly regarded and star-studded LADIES & GENTLEMEN album (with Joan Osborne, Joss Stone, etc.) while 2015 and 2017 delivered a pair of UNDERCOVER EPs that find you reinterpreting the songs of Tom Petty, My Morning Jacket, Pink Floyd and more. Will there be a continuation of projects like these in future?
ANDY HALL: We very well may do another UNDERCOVER. It’s a great concept because it pure fun for us. Super low pressure and we do it all live in one day on the studio. It gives us a chance to learn new music and discover new ideas for our original songs. I’m sure there will be more collaborations in the future, but for now, we’re really enjoying writing and playing together just the five of us.

DAVE: The whirlwind, sonic rush of RISE SUN concludes with “Truth And Love”. By punctuating the album as such, what message are you ultimately wanting the listener to walk away with?
ANDY FALCO: I think the overall message is a theme of hope and positivity. We need that in the world more than ever it seems, and it is something that I think we all as a band feel and are passionate about. When you write from the heart, it reflects what is genuinely going on inside and I think maybe a lot of people are feeling the same things we are. We hope the record can make people feel love, feel positivity and that we are all in this together as humans. 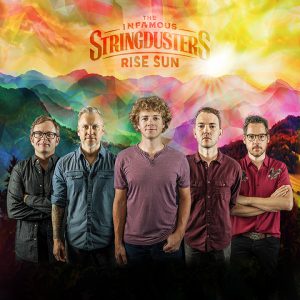