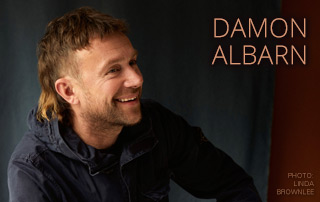 Does anyone remember who won the great Britpop war of the 1990s? Was it Oasis or was it Blur? Or maybe Suede? My Life Story? Super Furry Animals? Back then, it seemed like such a big deal but now it is just another thumbtack on the road map of pop culture. In hindsight, you’ll realize that very few of the Britpop bands survived the battle without losing band members or falling apart altogether. While the Britpop bands’ music continues to be played and talked about, only a handful of the musicians involved had any longevity in the music industry. The sparring Oasis brothers (Liam and Noel Gallagher) certainly did since both are still releasing music (separately, of course). Suede, My Life Story, and a few other bands have returned from the shadows after hiding away for a bit. However, only one of the Britpop artists involved has thrived – and evolved – since the wars died down: Damon Albarn.

As leader of Blur, he was the voice of young England in the 1990s and withstood the punches and blows from his main competitors, those cantankerous Gallagher brothers. When the dust settled, he set Blur aside and pursued many different musical avenues including Gorillaz, Mali Music, The Good, The Bad & The Queen, and many other side-projects and collaborations. More importantly, Damon Albarn experimented with many styles of music – from electronica to hip hop, pop to world music. Using his high profile for good, Albarn was also one of the forces behind the Honest Jon’s Records label, helping to release many obscure and eclectic artists. While his musical projects have been successful both artistically and/or commercially, Albarn has continued to follow his muse, creating or supporting music that he feels passionate about.

Now, in 2021, Damon Albarn unleashes THE NEARER THE FOUNTAIN, MORE PURE THE STREAM FLOWS, an album that stands apart from his previous releases yet still retains that classic Albarn songwriting style. Initially, the album was meant to be an orchestral album inspired by Iceland’s landscapes but the pandemic – and ensuing lockdowns – changed the direction of the project. The album evolved and became a proper solo album with Damon’s voice surrounded by a landscape of electronic noises, both modern and vintage. The songs can sometimes feel cold and barren yet, overall, they are wonderous in their honest beauty. Without making too any comparisons, fans of Albarn’s past projects will embrace the album, but it will also interest fans of pioneering rock legends like David Bowie. In fact, Bowie’s presence can be felt between the different atmospheres that Albarn creates on THE NEARER THE FOUNTAIN, MORE PURE THE STREAM FLOWS. This is an album with depth and emotion that is buoyed by wonderful melodies. If you think you know Damon Albarn, then give this album a spin. You will find that he’s still evolving, still experimenting, and still as relevant as ever.

THE NEARER THE FOUNTAIN, MORE PURE THE STREAM FLOWS